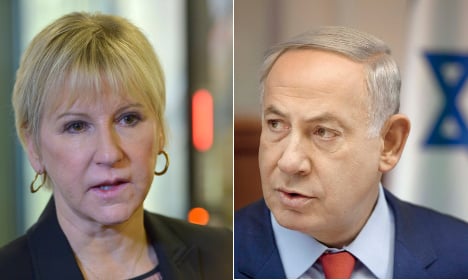 Wallström denounced a recent spate of Palestinian knife and car-ramming attacks against Israelis in a Swedish parliament debate on Friday and expressed support of Israel's right to defend itself.

“And likewise, the response must not be of the kind – and this is what I say in other situations where the response is such that it results in extrajudicial executions or is disproportionate in that the number of people killed on that side exceeds the original number of deaths many times over,” she added.

“I condemn the statements, the scandalous statements, made by the foreign minister of Sweden. (…) It seems she expects Israel's citizens to bare their throats to those trying to stab them. This will not happen, and we will continue to protect the lives of Israel's citizens,” he told broadcasters.

However, in a joint statement with Swedish Prime Minister Stefan Löfven, Wallström insisted she had spoken in general terms, implying that her comments had been deliberately taken out of context.

“The Minister for Foreign Affairs did not, as alleged, say that extrajudicial executions occur in Israel. (…) The situation in the Middle East is difficult enough without having to be encumbered by misunderstandings about anybody's intentions,” read the statement provided to media.

It is not the first time the Swedish foreign minister has stirred anger in Israel, where the Nordic country caused furore after it formally recognized Palestine last year.

Thoughts she expressed on the Israel-Palestine conflict and radicalization in the Middle East in the wake of the Paris terror attacks last month were slammed as “appallingly impudent” by a foreign ministry spokesman.

Middle East expert and political scientist Anders Persson, based at Lund University in southern Sweden, told the TT news agency that he was not surprised her comments had once again sparked debate.

“Unfortunately in Israel a culture of criticizing Sweden and finding opportunities to do so has developed, especially going after Wallström and condemning her statements,” he said.

According to Reuters, 102 Palestinians – including 63 identified as perpetrators of attacks – have been killed by Israeli police or military forces. Palestinian attacks have killed 19 Israelis and one US citizen, wrote the news agency.