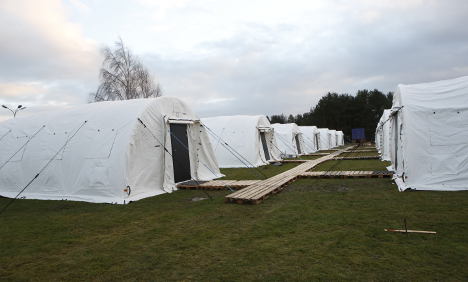 Around 20 refugees will move into the tent camp in Revingehed, a field near Lund in southern Sweden.

“We hope that everything is in place, so the first people to arrive know that they will be well received,” Rebecca Bichis, regional manager for the Swedish Migration Agency (Migrationsverket) told Swedish public broadcaster SVT on Monday.

The camp will eventually be home to more than 375 refugees, with 17 tents each offering beds for up to 12 people. Further accommodation is scheduled to open in 2016.

It has been erected on a moorland area near military training grounds and was supposed to open its doors in October, but was held back by administrative delays.

Sweden's decision to open the camp came as record numbers of people sought refuge in the Nordic nation earlier this autumn, with the country's Prime Minister Stefan Löfven describing them as a response to an approaching “crisis situation”.

The country has since toughened up border checks and announced it will restrict the number of residency permits given to new arrivals. What the tents could look like. Photo: Björn Johansson/MSB/TT

All of the tents will be heated and are set to open as temperatures in southern Sweden remain higher than average for this time of year with forecasters predicting they are unlikely to drop below 2C.

“It's not intended to be a lifelong solution but housing for a short period of time. But it's good that it's warm and tidy,” he said after inspecting five tents set up to give him and media an idea of how the camp could look.

According to the Swedish Migration Agency, the number of refugees arriving in Sweden has dropped by 30 percent since the country reinstated border controls in mid-November.

In October it doubled its refugee forecast, with up to 190,000 new arrivals expected on Swedish soil over the whole of 2015.