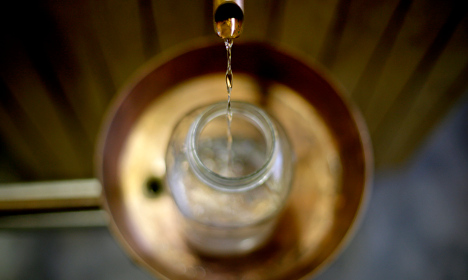 The unnamed resident called the police on Sunday afternoon after they smelled something oddly reminiscent of mash – a product created when grain and water are distilled to make strong alcohol.

They immediately suspected their neighbour was attempting to make moonshine (or, 'hembränt', in Swedish), a custom which is strictly illegal but remains vaguely socially accepted in much of rural Sweden.

It is usually made by distilling ingredients including yeast, sugar and water. However, if the still is mishandled it can cause a major blast, which the anonymous witness suspected was about to happen.

“The neighbour was afraid it was about to explode,” police spokesman Johan Sjöholm explained the TT newswire.

However, when police showed up at the apartment they found the peculiar smell came only from the suspected moonshine producer's Sunday dinner: Swedish cabbage pudding ('kålpudding').

What cabbage pudding can look like. Photo: Anders Porter/Flickr

Cabbage pudding is traditional Swedish comfort food and consists of chopped cabbage mixed with, usually, minced beef or pork. It is usually served with boiled potatoes and lingonberries.

It is not the first time strange Swedish dietary habits spark police action. In October fire and rescue services were called out to a presumed gas leak in southern Stockholm – which turned out to be no more than a fermented herring party.