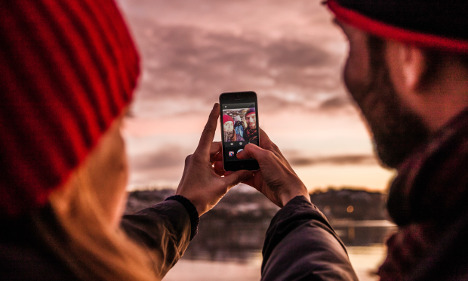 A couple using a smartphone in Sweden. Photo: Per Pixel Petterson/Image Bank Sweden
Reading this on your mobile? Chances are that you'll soon be swapping your mini screen for an artificial electronic assistant, according to new research carried out by researchers working for Stockholm-based tech conglomerate Ericsson.
The company's ConsumerLab quizzed more than 100,000 customers in tech-savvy Sweden as well as 39 other countries about their opinions and technological desires for the future and says its research statistically represents the views of 1.1 billion people worldwide.
It found that half of smartphone users think that mobile technology will be a thing of the past within the next five years, as the growth of artificial intelligence starts enabling interaction with objects without the need for a phone or tablet.
“A smartphone in the hand, it's really not that practical. For example, not when one is driving a car or cooking. And there are many situations where display screens are not so good. Therefore, one on two think that smartphones will belong to the past within five years,” said Rebecka Cedering Ångström from Ericsson ConsumerLab. Swedes are among the world's most tech-savvy citizens. Photo: Helena Wahlman/Image Bank Sweden
According to Ångström, artificial assistants could instead help consumers to multitask, as well as working as teachers, financial advisors and even doctors.
“Things just go so fast now from the idea to the mass market. We have not studied the technology, this is just what consumers think,” she added.
Meanwhile she predicts that evolving technologies could also allow customers to enhance their leisure time.
“Just imagine watching football and being able to choose from where you want to see the game from different places in the stands, or perhaps even from the pitch. Shopping is also an area where you could [virtually] try on shoes and see how they fit on your own feet,” said Ångström.
The research also suggests that customers are becoming less likely to ditch companies if they are disappointed with the service they receive, and more likely to use social networks to seek change.
“Previously it has been the case that when consumers are not happy they vote with their feet. But now 32 percent think that the best way to get a company to transform itself is by posting on the company's social media channels,” said Ångström.
In a separate statement, Michael Björn, Head of Research, Ericsson ConsumerLab, added: “Some of these trends may seem futuristic. But consumer interest in new interaction paradigms such as AI and virtual reality (VR), as well as in embedding the internet in the walls of homes or even in our bodies, is quite strong. This means we could soon see new consumer product categories appearing – and whole industries transforming – to accommodate this development.”
Ericsson is a Swedish multinational company providing technology and communication services. It has its headquarters in Stockholm and employs more than 110,000 staff worldwide. Ericsson's Stockholm office. Photo: Jessica Gow/TT
Here are the firm's 10 hot consumer trends for 2016 and beyond:
The Lifestyle Network Effect
Four out of five people now experience an effect where the benefits gained from online services increases as more people use them. Globally, one in three consumers already participates in various forms of the sharing economy.
Streaming Natives
Teenagers watch more YouTube video content daily than other age groups. Forty-six percent of 16-19 year-olds spend an hour or more on YouTube every day.
AI Ends The Screen Age
Artificial intelligence will enable interaction with objects without the need for a smartphone screen. One in two smartphone users think smartphones will be a thing of the past within the next five years.
Virtual Gets Real
Consumers want virtual technology for everyday activities such as watching sports and making video calls. Forty-four percent even want to print their own food.
Sensing Homes
Fifty-five percent of smartphone owners believe bricks used to build homes could include sensors that monitor mold, leakage and electricity issues within the next five years. As a result, the concept of smart homes may need to be rethought from the ground up.
Smart Commuters
Commuters want to use their time meaningfully and not feel like passive objects in transit. Eighty-six percent would use personalized commuting services if they were available.
Emergency Chat
Social networks may become the preferred way to contact emergency services. Six out of 10 consumers are also interested in a disaster information app.
Internables
Internal sensors that measure well-being in our bodies may become the new wearables. Eight out of 10 consumers would like to use technology to enhance sensory perceptions and cognitive abilities such as vision, memory and hearing.
Everything Gets Hacked
Most smartphone users believe hacking and viruses will continue to be an issue. As a positive side-effect, one in five say they have greater trust in an organization that was hacked but then solved the problem.
Netizen Journalists
Consumers share more information than ever and believe it increases their influence on society. More than a third believe blowing the whistle on a corrupt company online has greater impact than going to the police.