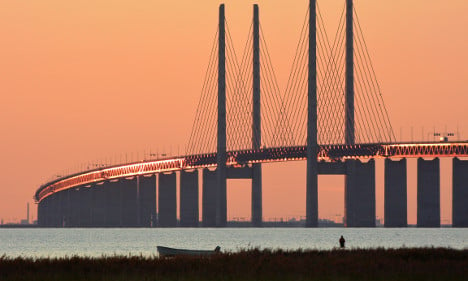 The Öresund bridge links Malmö in Sweden and Copenhagen. Photo: Johan Nilsson/TT
Sweden's government said last week that it wanted to introduce ID checks on buses, trains and ferries, and to have the right to close the Öresund Bridge in the event of a crisis, including one linked to refugees travelling to the region.
The plans were set to be voted on in parliament on Wednesday. But Annika Hirvonen Falk, deputy chairperson of the government's Justice Committee told Swedish public broadcaster SVT on Tuesday that the bridge part of the proposal had been taken out of the draft bill amid controversy over the idea.
The politician who is a member of Sweden's Green Party said she was happy with the decision.
“The Green Party has pushed this from the beginning and we are very pleased that the government chooses to go with our line.”
Sweden's centre-right opposition parties the Moderates and the Liberals have also criticised the idea, along with the Council on Legislation (Lagrådet), which advises on the legality of government proposals. On Monday evening it likened the proposals to “emergency laws” and criticized the way they were drawn up.
“It is clear to the Council on Legislation that the temporary legislation being proposed will not be fit for the purpose of tackling the current challenges, if protecting the right to asylum is also desired,” it said in a statement.
“Such intrusive legislation should only be introduced after a thorough inquiry that takes into account the basic principles of the rule of law.”

The body is purely advisory and does not have the power to block legislation, but it has an important role in advising whether proposed legislation is compatible with existing laws and the constitution.

“It is important to analyze the criticism that the Council on Legislation comes up with,” Interior Minister Anders Ygeman told TT.

However he said that he still favoured the bridge closure measure as a “last minute measure” and wanted to continue discussing the possibility.

Draft legislation outlining the government's plans to introduce tougher checks on public transport is still expected to be put to parliament, despite controversy over the idea.

Swedish train operator SJ last week described the proposal as likely to have a “heavy impact” on both staff and passengers, describing the demands as “unreasonable”.

Meanwhile public transport operator Skånetrafiken warned that mandatory ID checks could cause delays of up to an hour.