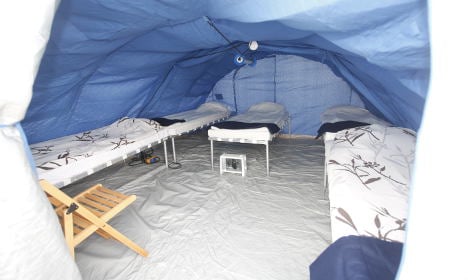 The inside of one of the tents at the camp, photographed in October. Photo: Drago Prvulovic/TT
The tent camp in Revingehed, a field near Lund in southern Sweden, is eventually set to house 375 refugees, with the first 20 set to sleep there on Tuesday night.
But a spokesperson for Sweden's Migration Agency (Migrationsverket) told The Local that only “a few” suitable guests had so far been found for the temporary accommodation, which is designed for single people or couples, rather than families or unaccompanied children.
“No, they won't move in today. The overnight influx consisted mainly of families and people who had organized their own accommodation. A few gentlemen are currently waiting in Malmö and as soon as we've got a bigger group together we'll move them,” said Rebecca Bichis,  regional manager for the agency.
She said that she expected refugees to instead be transferred on Wednesday but that this “depends completely on the influx from Denmark and Germany”.
Her comments came just a week after reports that hundreds of refugees were crammed inside the initial reception centre for new arrivals in the region, MalmöMässan, a former Eurovision venue, which
Save The Children criticised for failing to reach international standards for refugee camps in the availability of toilets, showers and health care.
However the hall has since become much less packed and Migrationsverket told The Local that there were only 21 new arrivals to MalmöMässan on Monday night.
There has been a nationwide dip in the number of refugees claiming asylum, following tighter border checks and a government announcement that it would cut the number of residency permits made available.
While in October around 10,000 people were registered in a week, Migrationsverket statistics suggest that 4,721 people sought asylum across Sweden during the first seven days of December. The tent camp. Photo: Drago Prvulovic/TT
Bichis said on Tuesday that any refugees asked to move into the new tent camp later in the week would be given plenty of information about the accommodation, following previous complaints from refugees driven to a holiday park and other remote locations.
“As soon as they get to MalmöMässan we inform them of the housing situation in Sweden and show them pictures of the tent camp so that they are aware of what to expect.”
“The staff at Revingehed are preparing everything right now to make sure that everyone gets immediate access to a duvet, pillow, hygiene articles and so on when they arrive.”
A total of 12 people will be working at the camp, six experienced workers and six other staff who will be trained up in the process. They will provide breakfast, lunch and dinner for the refugees and be on hand to answer questions and offer other assistance. Guards will also be present round-the-clock, following a spate of attacks on asylum housing.
Bichis told The Local that it remained unclear how long any of the guests would stay at the camp.
“It could be short-term but also long-term. It depends on whether councils across Sweden manage to find housing for them. Our hope is that they won't have to stay too long, but it's completely dependent on the 'accommodation chain' in the rest of Sweden.”
The camp has been erected on a moorland area near military training grounds and was initially supposed to open its doors in October, but was held up by administrative delays linked to planning applications.