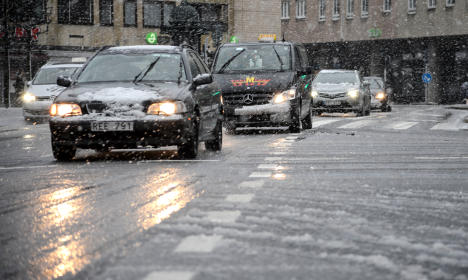 Gävle in northern Sweden saw the mercury climb to 11.9C over the weekend, the warmest December temperatures in more than half a century. Stockholm meanwhile basked in 12.2 degrees – warmer than Midsummer Eve's disappointing 10C at the height of the summer.

Temperatures in the area around the Swedish capital were around five degrees warmer than the region's normal average December weather on Tuesday.

And winter is only just beginning to creep south of the northern Norrland region, according to the SMHI national weather institute. Swedes say the season does not officially begin until average daily temperatures stay below zero for five consecutive days.

But forecasters still warned of black ice on Swedish roads. Colder weather is predicted to hit on Thursday and establish a firm grip on the country by Monday.

“It looks like the cold air is here to stay after that,” said SVT meteorologist Åsa Rasmussen.

Southern Sweden can expect degrees of around zero, while northern parts of Sweden could see temperatures drop to 20C below, she added.

While parts of Sweden have already been coated with snow, other parts have had little more than a dusting.