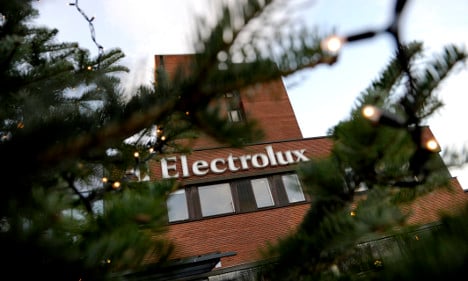 One of the Electrolux buildings in Stockholm. Photo: Janerik Henriksson/TT
Electrolux, which sells brands including Frigidaire, AEG and Zanussi as well as its own name, is the world's second-largest home appliance maker after Whirlpool, but suffered a setback on Monday, announcing that a $3.3 billion deal with GE had run into trouble.
The company released a press statement on Wednesday, announcing that job cuts would be made at the Swedish firm's headquarters in Stockholm.
“Measures to restore profitability are now being taken, including staff reductions and downsizing of activities, mainly in the U.S., Sweden and China. Consultations have been initiated with the Swedish Unions,” the release read.
The redundancies are set to be made within the small appliances division of the company, but Electrolux refused to disclose potential figures when pressed by the Swedish media.
“We are not going out with any number, but there are a limited number of positions that are affected and we are beginning negotiations with staff about it,” Paul Palmstedt, Acting Press Officer told the TT news agency.
The company said that the cost-cutting measures would “reach full effect” from the end of 2016, with estimated annual cost savings of 120 million kronor ($1.4 million). Costs related to the program are expected to amount to 190 million kronor ($2.2 million).
Once the program is completed, it said that the small appliances division would have financial flexibility to continue to invest in profitable product categories.
The failed deal with General Electric was announced in September 2014, but was soon in hot water after the US Justice Department said the deal would hand Electrolux a US market share of some 40 percent.
Justice sued both companies and said the deal was unfair because it would combine two of the leading manufacturers of ranges, cooktops and wall ovens sold in the United States, eliminating competition that benefits US consumers.
“In the courtroom, facts matter, rhetoric does not,” Deputy Assistant Attorney General David I. Gelfand of the Justice Department's Antitrust Division said in a press release.
“This deal was bad for the millions of consumers who buy cooking appliances every year. Electrolux and General Electric could not overcome that reality at trial,” he said.
But GE's announcement that it was pulling the deal took many by surprise since a verdict wasn't expected until the next few weeks or January.
“I was surprised this deal was contested by the Justice Department, but then when we saw what their concern was, which was the creation of duopoly in a part of the appliance market, it began not to look so good,” said Karri Rinta, an analyst with Handelsbanken Capital Markets on Monday.
“It's back to square one for Electrolux in North America. This is a deal that would have made them much stronger in the US especially against Samsung and LG,” two South Korean competitors, he said.
Under the transaction agreement, Electrolux is required to pay GE a termination fee of $175 million. GE has requested a pay-out of the amount.
Electrolux shares plunged on the Stockholm stock exchange in reaction to the announcement, with trading down 13 percent at 208.10 kronor on Monday afternoon having earlier plunged as low as 203.20 kronor.