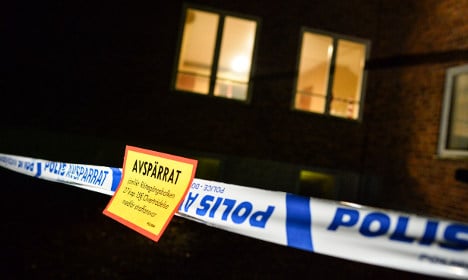 Police and fire and rescue services arrived at the centre in Ängelholm at around 2.30am on Wednesday after reports a number of unidentified attackers had attempted to start a blaze.

“Some people broke windows of at least two buildings and threw newspapers that they had set on fire inside,” Lennart Linderos, emergency services officer, told the Sydsvenskan regional daily.

No one was injured and damages reported were mainly caused by smoke, said authorities. But the incident is the latest in a string of similar attacks on refugee housing across Sweden which has seen investigations launched into more than two dozen suspected arson attacks in the past year.

A broken window at the Ängelholm building. Photo: Johan Nilsson/TT

Earlier on Tuesday evening, police were called to an asylum centre in Strängnäs, central Sweden, after a group of demonstrators put up a banner with anti-immigration messages and shouted far-right slogans.

“They sieg heiled before they disappeared. (…) It was pure white power behaviour. They were chanting and putting up a banner outside the house,” Roland Lindkvist at the regional police told the TT newswire.

The demonstrators had left the scene before police arrived. An investigation into incitement of racial hatred was launched.

“The staff made all the residents go inside before they got too agitated themselves. So there wasn't much by way of confrontation,” said Lindkvist, who would not say if they had identified a specific threat against the accommodation centre.

“It's too early to tell. But we have supervision at all our housing all the time. It's been like that for a few months now because of everything that has taken place recently.”

Mona Sahlin, the national coordinator for protecting democracy against violent extremism, has been critical of “inflammatory” rhetoric being spread in the public debate and on social networks.

“I'm certain that it is part of the far-right extremist movement to use the refugee situation to strengthen their arguments… It was the same 20 years ago,” Sahlin told the AFP news agency last month.

Sweden, which earlier predicted 190,000 asylum claims this year, has seen a nationwide dip in the number of refugees arriving in the country, following tighter border checks and a government announcement that it would cut the number of residency permits made available.