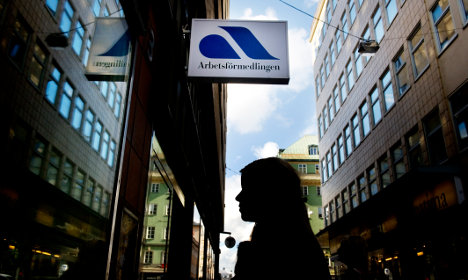 Unemployment for foreign-born people is rising in Sweden. Photo: Jessica Gow/TT
The agency released the figures as part of its labour market forecast for 2016 to 2017. It suggested that unemployment was set to decline between Swedish-born citizens aged between 15 and 64 from 7.5 percent in 2015 to around 6.6 percent.
However it said it expected the jobless rate for foreigners would rise.
A total of 21.8 percent of foreign-born citizens are currently unemployed, figures from Sweden's Employment Agency (Arbetsförmedlingen) showed last month. This means that around 50 percent of unemployed people in Sweden are originally from abroad. The agency's latest research suggests this is set to rise to 60 percent by 2017.
“The Swedish economy is doing very well. It is pleasing there's such a good growth of new jobs,” said the Swedish Employment Agency's Director General Mikael Sjöberg.
But he also noted that Sweden was facing an “increasingly difficult challenge” linked to rising numbers of new arrivals in the country, many of whom have “little education”.
The director suggested that there was a strong need to expand training schemes to help this group enter the Swedish labour market.
The predicted rise in unemployment among foreign-born workers in Sweden is linked to record recent asylum applications in the Nordic country.
In October, Sweden's Migration Agency predicted that 190,000 people would make asylum claims this year. However there has since been a dip in the number of refugees arriving in the country, following tighter border checks and a government announcement that it would cut the number of residency permits made available.
Arbetsförmedlingen's predictions follow a separate report by the International Monetary Fund last week which also suggested that soaring asylum claims would likely to push up unemployment in the medium term.

“Rising migration inflows pose upside risks to unemployment for some years,” said a report by the IMF, which has previously criticized Sweden for its gap in employment levels between natives and immigrants.

However, another recent key report by banking giant Nordea estimated that Sweden's record intake of refugees could boost the country's GDP by 0.5 percent more than previously predicted next year, with those who do manage to land a job helping to plug skills gaps on the Swedish job market.

Prime Minister Stefan Löfven has previously insisted he will achieve his goal of Sweden having the lowest unemployment rate in the EU by 2020.

However, Finance Minister Magdalena Andersson noted in an interview with the Svenska Dagbladet newspaper in November that his promise was looking increasingly “harder to reach”.