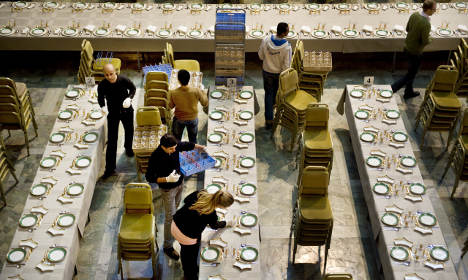 Staff preparing for a previous Nobel banquet. Photo: Fredrik Sandberg/TT
1. Who's being awarded prizes again?
The winners of this year's annual Nobel Prizes were only announced in October, but how many can you actually name now?
Below is a recap of the key people you need to remember and what they were given awards for.
They've all been invited to Stockholm's Concert Hall to pick up their prestigious awards, following several days of Nobel-themed lectures and workshops around the Swedish capital. As well as collecting a medal, each winner will be awarded eight million kronor in recognition of their work.
Physics – Takaaki Kajita and Arthur B. McDonald “for the discovery of neutrino oscillations, which shows that neutrinos have mass”
Chemistry – Tomas Lindahl, Paul Modrich and Aziz Sancar “for mechanistic studies of DNA repair”
Physiology or Medicine – William C. Campbell and Satoshi Ōmura “for their discoveries concerning a novel therapy against infections caused by roundworm parasites” and Youyou Tu “for her discoveries concerning a novel therapy against Malaria”
Literature – Svetlana Alexievich “for her polyphonic writings, a monument to suffering and courage in our time”
Economics – Angus Deaton “for his analysis of consumption, poverty, and welfare” Some of the Nobel winners gathering for a press conference in Stockholm earlier this week. Photo: Anders Wiklund/TT
2. Remind me why all this is happening in Sweden?
Alfred Nobel was a Swedish scholar who invented dynamite in 1866. In his will, he offered his vast fortune to be shared each year with the best thinkers in literature, peace, physics, chemistry and medicine.
In 1968, the Swedish central bank created the Riksbank Prize in Economic Sciences, to be announced in Nobel's honour along with the rest of the prizes in October each year.
The Nobel Peace Prize will be handed out in Oslo at 1pm on Thursday. This year it was given to the National Dialogue Quartet activism group  “for its decisive contribution to the building of a pluralistic democracy in Tunisia in the wake of the Jasmine Revolution of 2011”. A picture of Alfred Nobel. Image: TT
3. So who gets to go to the banquet?
Around a thousand movers and shakers including Swedish royalty, politicians and top academics will be attending the prestigious evening bash following the award ceremony. A seating plan of the top table released on Wednesday revealed that Sweden-born chemistry prize winner Tomas Lindahl will sit next to newlywed and former reality television star Princess Sofia, while she'll have Japanese physics laureate Takaaki Kajita on her other side. His wife Michiko Kajita will be dining beside King Carl XVI Gustaf.
Sweden's Prime Minister Stefan Löfven will also be eating on the same table as the winners, along with international guests including Mario Draghi, President of the European Central Bank, and Canada's Minister of Science, Kirsty Duncan.

Newlyweds Princess Sofia and Prince Carl Phillip will be among the guests at the dinner. Photo: Margareta Bloom Sandebäck/TT
4. What's on the menu?
There are some big culinary names behind this year's food including chef Sayan Isaksson who runs the high-end Shibumi and Råkultur restaurants as well Esperanto, which has a Michelin star. Daniel Roos, who is in charge of the Banquet dessert for the second consecutive year, is a restaurateur and pastry chef at the K-märkt restaurant in Stockholm and runs the company Pastry Design. The exact menu is kept a secret, but according to a recent press release it is set to highlight local ingredients from Scandinavia and was developed with sustainability in mind and with a “focus on vegetables”. Guests tucking into their soup in at the banquet in 2009. Photo: Claudio Bresciani/TT
5. Is there any entertainment?
Of course. Sweden is one of the world's biggest pop music exports and this year the after dinner entertainment is set to be a homage to Swedish music in modern times. Soulful Seinabo Sey, who is fast becoming Sweden's hottest new global star, will be performing alongside one of Sweden's best-known choral groups, the Gustav Sjökvist Chamber Choir.
Plus, there'll be speeches from the winners themselves. We challenge you to guess how many drinks they've each had.
6. There's bound to be some celebrity gossip too, right?
That depends on your definition of gossip. Last year Prime Minister Stefan Löfven avoided being seen close to any rival politicians, after calling a snap election (which later got cancelled) because he failed to get enough support for his budget. Princess Madeleine once caused a stir for wearing a rather low cut dress, while former Swedish leader Göran Persson raised eyebrows by answering his mobile during dinner. By the way noone from the nationalist Sweden Democrat party gets invited to either the prize ceremony or the meal.
Not exactly Hollywood-style scandals. But in Social Democrat-led subtle Sweden, the Nobel banquet is about as glitzy as it gets. So grab a glass of glögg and join your colleagues toasting the action online or on TV, or head to the Nobel Museum in Stockholm to watch it on the big screen.