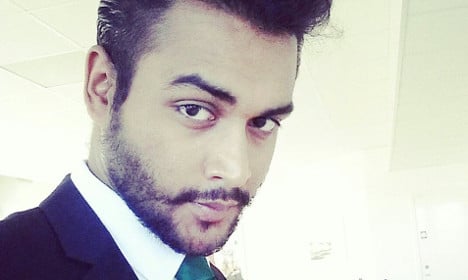 Entrepreneur Prashant Jain who is behind the initiative. Photo: Private
The Bollywood movie scene is set to light up screens in Stockholm, Gothenburg, Malmö and Helsingborg later this month, with two major films set for release, thanks to the efforts of an Indian hedge fund manager based in the Swedish capital.
Prashant Jain, who moved to Stockholm in 2012 following a stint working in Amsterdam, told The Local this week that he had decided to buy the rights to the films as part of efforts to improve entertainment for Sweden's growing immigrant community from South Asia and the Middle East. He said he was also hopeful that the movies would help Swedes to become more informed about different cultures.
“Even though these are just stories, they really tell you something about life in India and I think it's a great learning experience for the people watching them,” he said.
“Until now there haven't been that many opportunities for people in Sweden to watch Bollywood hits though.”
One of the films, 'Diwale', is an action comedy. The second, 'Bajiro Mastani', is a period drama about a romance between an Indian General and his second wife with a cast including leading names in the industry including Priyanka Chopra, Deepika Padukone and Ranveer Singh.
Both movies will be shown with English subtitles at cinemas in the four Swedish cities taking part in the project later this month, following a Nordic premiere at the Swedish Film Institute in Stockholm on December 18th.
“This will be a big red carpet event and it will be the first time that not one but two Bollywood films are having a Swedish premiere on the same day as their worldwide premiere in India,” explained Jain.
The screenings are being formally organized by BollywoodBio Sweden, a media brand designed to advance the social and cultural activities of the Indian community in The Nordics. It is a branch of Swedish financial firm Aneo AB.
The company said in a statement that it hoped that the South Asian film scene could take off in Sweden in a similar way to in France and Germany, where several recent releases have been box office hits.
“BollywoodBio, through its events and activities, is committed to strengthen the deep-rooted Indo-Nordic friendship and cultural relationship through cinema,” it added.