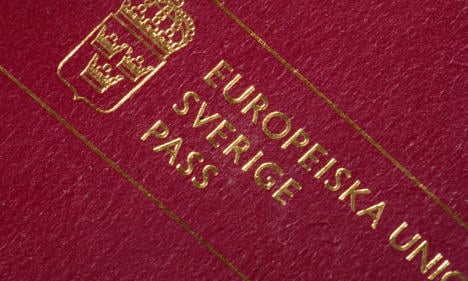 A Swedish passport. Photo: Hasse Holmberg/Scanpix/TT
Tougher penalties for those caught financing terror activities are also set to be introduced as part of the new strategy, alongside the increased use of surveillance cameras and the criminalization of travel linked to extremist activities. In addition, municipalities are being asked to make a greater effort to prevent radicalization on Swedish soil.
As part of the crackdown on fake passports, residents will only be allowed to apply for three replacement documents within a five-year period.
The proposals were revealed at a press conference in Stockholm on Thursday afternoon, with representatives of Sweden's ruling Social Democrat-Green coalition joining members of the country's main centre-right Alliance parties. The opposition Left party was involved in earlier discussions but was not part of the final agreement and the nationalist Sweden Democrats were not invited to join the talks.
“I am very pleased to announce a deal with a broad consensus in parliament behind these measures against terrorism,” Sweden's Interior Minister Anders Ygeman told journalists at a press conference.

Sweden's Interior Minister Anders Ygeman (centre) and the cross-party politicians linked to the deal. Photo: Thommy Tengborg/TT
Beatrice Ask, a spokesperson for the Moderates, Sweden's largest centre-right group, and a former Justice Minister added: “I think that we have come to good points on which we have been able to unite, and it's a broad range of policies”.
Other measures included in the 13-point package include tougher punishments for those caught with explosives or hand grenades, measures to prevent online recruitment and the expansion of police resources to deal with potential future crises.
READ ALSO: Swedish passports hot property on black market
Sweden's Prime Minister Stefan Löfven told journalists at a press conference last month that he believed politicians from across the spectrum had previously been “naive” about the possibility of terror crimes in the Nordic nation and promised to increase surveillance.
His comments came after Sweden raised its threat level to “high” for the first time in history. However a 22-year-old man who was accused of plotting terror offences in Sweden was released by officers a few days later.