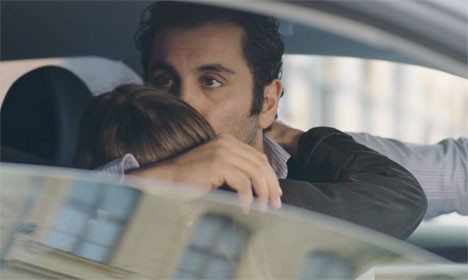 A screenshot from the video. Image: Care Norway
The video, directed by Swede Jakob Ström for the Norwegian arm of the charity Care International, promotes the message that fathers need to do more than just guard their daughters from physical dangers, they should also work to change attitudes in society.
In the five minute movie, ‘Dear Daddy’, a daughter tells her father about all of the harassment and abuse she will suffer at the hands of men during her lifetime.
“I need to ask you a favour. Warning: it’s about boys. Because, you see, I will be born a girl. Which means by the time I’m 14, the boys in my class will have called me a whore, a bitch, a cunt and many other things. It’s just for fun of course, something boys do. So you won’t worry. And I understand that,” the girl says.
“By the time I turn 16, a couple of the boys will have snuck their hands down my pants while I’m so drunk I can’t even stand straight. And although I say no, they just laugh. It’s funny, right?” the daughter continues.
She then tells her father about how she was raped at 21 by a family friend before finally meeting “Mr. Perfect”.  But things don’t stay perfect for long, and the boyfriend begins to both verbally and physically abuse her.
“Dear daddy, this is the favour I want to ask. One thing always leads to another. So please stop it before it gets the chance to begin. Don’t let my brothers call girls whores, because they’re not,” the video says.
Care International operates in 90 countries and the Norwegian division, Care Norway, said it had launched the campaign to highlight abuse at home and abroad.
“One in five daughters in Norway are subjected to abuse from a partner. Daughters of all ages, in all countries and at all levels of society are at risk. Everyone can do something, and as a father you have a special responsibility and a very special opportunity to keep your daughter from being subjected to violence,” the organization said in a statement.
The Swedish-language version of the film had been viewed over five million times on Facebook by Friday afternoon while the original Norwegian version had been seen well over 300,000 times. The charity said it hoped that the English version released on Thursday would find similar success.
“It is difficult to get men to discuss violence against women (…) We and the advertising agency Sjærven arrived at this angle to give kind, good men, fathers, with tips on how they can respond when others behave badly towards women and girls,” Henrik Vanik, communications director for the charity, told Swedish newspaper Dagens Nyheter.
He added that the film was already being translated into Russian, with French and Spanish versions also in the works.
Accoring to Vanick, the United Nations has contacted Swedish director Jakob Ström to discuss using an international celebrity to revoice the text, such as the British actress Emma Watson. The former Harry Potter star already plays an active role in the UN's 'He for She' projects, which are also strongly backed by Sweden's Prime Minister Stefan Löfven.