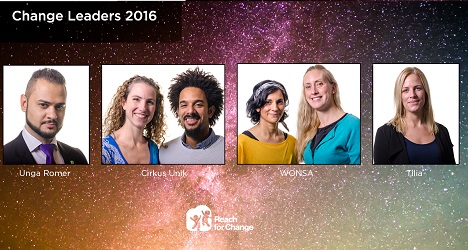 The winning startup ideas tackle problems related to psychological health, discrimination, racism, and more. Now they have received funding and advice from some of the best in the business to make their dreams a reality – and make life better for kids around the world.

“These four social entrepreneurs show the bright future we can create,” said Alex Budak, director of Reach for Change in Sweden.

“Sometimes it may feel like there are too many problems, but we see that these innovative solutions, this passion for improving life for children, really are there – and it gives us all hope. We look forward to working with these entrepreneurs and helping them grow.”

One of the winners is Annsofie Blixt, founder of Tilia, a non-profit organization which works to prevent psychological problems in children and support those who do have problems. The workers are available 365 days a year at whatever times youth request their assistance.

“I have been engaged with non-profits for many years, and with youth with pscyhological issues,” she says. “From the beginning I was just happy to contribute what I could, but then I became frustrated that so many young people expressed that they weren't getting the help they needed.”

So Blixt started Tilia – based off of a vision of a world where adults have more time to listen to young people, in school, in relationships, and in healthcare. “Everyone is seen as a person, not a diagnose or a patient,” she says.

For five consecutive years Reach for change has selected social entrepreneurs with ideas that make life better for children. The hunt is not just in Sweden – the foundation has searched for ideas in Bulgaria, Russia, Chad, DR Congo, Rhana, Rwanda, Tanzania, Senegal, Denmark, Norway, Lithuania, Latvia, Estonia, Ethiopia, and Croatia.

The Swedish winners this year were Tilia, Wonsa, Unga Romer, and Cirkus Unik.

Unga Romer (Young Roma) aims to make sure youth with Roma background are included and not discriminated and shunned. Emir Selimi, the founder of Unga Romer, received recognition earlier this year for the programme as well.

Although a lot of current domestic debate is centred around poorer Roma people travelling to Sweden from Eastern Europe, the ethnic minority has in fact lived and worked in the Nordic country for centuries.

And Selimi said that it is time for society to step up now, not in two decades.

“Historically, Roma people have lived in Europe for seven to eight hundred years. If people who emigrated to Australia just two hundred years ago can call themselves Australians, why can't we call ourselves Europeans? How much do you need to invest to replace all of that which has been taken from the Roma community?”