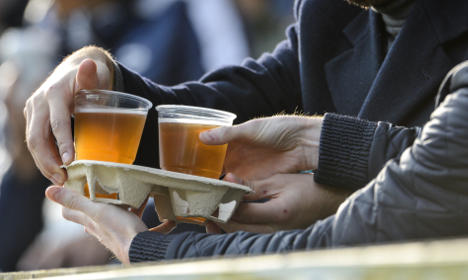 Young Swedes drinking beer at a football match. Photo: Martina Holmberg/TT
Swedes love to party at weekends and are famous for glugging down snaps on festive occasions. But it seems that the next generation of young adults is opting for a healthier approach.
A nationwide study, which looked at the habits of pupils aged between 15 and 18, asked students 70 questions about their experiences with alcohol, drugs and tobacco.
According to the research, 40 percent of boys in grade nine (aged 15) said that they had drunk alcohol at some point in the last twelve months.
This compares with 55 percent in 2011 and a whopping 77 percent in the early 1990s.
44 percent of 15-year-old girls questioned for the latest study said that they had enjoyed at least one drink over the past year.
“We are seeing, as we have previously reported, a sharp decline in alcohol consumption among schoolchildren,” said Isabella Gripe who wrote the report for Sweden's state-funded Central Association for Alcohol and other Drugs (CAN).
“When we made the regional analysis, we could see that the decline is evident in all regions,” she added in a press statement. Alcohol consumption is sinking among young Swedes. Photo: Martina Holmberg/TT
The study found that students drank more alcohol as they got older, but that overall consumption was still lower among 17-year-olds (upper high school grade two) than in the past.
75 percent of male and female pupils in this age group said that they had consumed alcohol in 2014-2015, compared to around 89 percent in 2004.
The research also suggests that smoking and drug use remains low in Sweden, but Gripe pointed to a trend for teenagers taking prescription narcotic drugs and urged parents to keep a closer eye on their medicine cabinets.
“We asked whether they used analgesic opioids such as tramadol or Citodon, which revealed that between six and eight percent have taken narcotics classed as medicine that they have not been prescribed by a doctor,” she told Swedish broadcaster SVT.
“It seems that young people do not perceive this as a drug (…) We do not know how they get hold of the drugs, but this is of course something that can be at home in people's medicine cupboards, for example, so they may have got it from there.”
Almost 10,000 pupils across Sweden were quizzed for the research, which CAN has been carrying out annually since the 1970s.