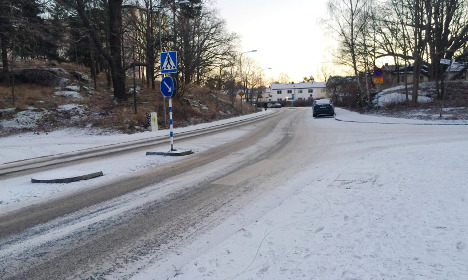 Snow in Sköndal near Stockholm on Monday morning. Photo: The Local

Mercury dropped to below zero across Sweden as the country celebrated its popular Lucia day, following a month of record warm winter temperatures for this time of the year.

Swedish transport authorities issued warnings of frost and black ice on Monday morning from Kalmar in southern Sweden to the Gävle region in northern parts of the country.

On Sunday afternoon a total of 17 traffic accidents were reported in one hour after the winter chill hit. And police were called to a serious road accident near Helsingborg in the south after a car crashed into a lorry during rush hour on Monday morning.

Forecasters said the ice was set to stay until mid-week.

“It's going to stay cold so the slippery surface already there will remain,” Hampus Sellman, meteorologist at Swedish weather institute SMHI, told the Aftonbladet tabloid.

Meanwhile, in Stockholm people got excited about the cooler temperatures. While northern as well as the far south of Sweden have already been coated with snow, the capital experienced its first dusting of the season on Sunday.

Looking out the window. First snow in Stockholm! pic.twitter.com/DqHdIASnXp

And one The Local reader had just landed in a frosty Strömsnäsbruk in southern Sweden, travelling from warmer climes in Australia.

However, some posted more tongue-in-cheek messages, referring to last winter when commuters experienced travel chaos when public transport ground to a halt in several parts of Sweden after snowfall.

Oh no! The dreaded Swedish “snö-kaos” is upon us, soon birds will fall from the skies and… https://t.co/hJFYNlPRNR

SMHI meteorologist Sandra Andersson told the TT news wire that the snow would likely melt before the holidays, but that northern Sweden still had a chance at a white Christmas.

“If the cold weather stays in Norrland there's a chance the white scenery will stay until Christmas, but how far south it is going to reach is hard to say,” she said.