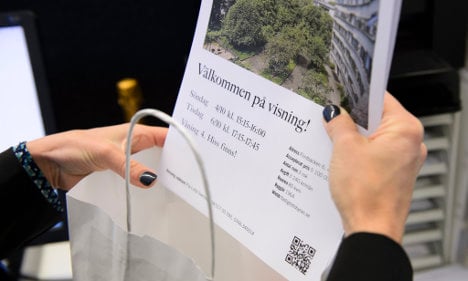 A woman at a house viewing in Sweden. Photo: Henrik Montgomery/TT
The cost of buying an apartment or house has rocketed in Sweden this year, with October prices showing an average jump of 14 percent compared to the same month in 2014 and even bigger hikes reported in the country's largest cities.
However two sets of statistics released on Monday suggested that property prices have dropped in recent weeks, following a number of strong warnings that the market had become a bubble that is waiting to burst.
Svensk Mäklarstatistik, a Swedish agency which measures real estate agent sales, reported that prices in central Stockholm dipped by one percent in November and also slipped by two percent in Gothenburg city centre.
Another index by private housing analysts Valueguard, using slightly different methodology, suggested that the cost of buying an apartment of house had dipped by 0.6 percent in both Stockholm and Gothenburg.
The reports immediately sparked debates in the Swedish media on Monday about whether the country's increasingly hot market was finally starting to cool down.
But Per-Arne Sandegren, head of analysis for Mäklarstatistik, told The Local that it was probably too soon to tell.
“I would say that this part of the year, in the beginning of Christmas season it's quite normal that the market slows down a bit,” he explained.
When asked if he felt that Swedish residents had also heeded to a major warning from National Institute of Economic Research (NIER) that the market could soon end up crashing, he said that “psychology is a part of this” but suggested it was “a bit early” to say for sure.
“The best thermometer will be in late January and early Febuary when it usually picks up (…) It is still very cheap to borrow money and there is a shortage of housing and a big demand still,” he said.
READ ALSO: Five essential tips for buying a home in Sweden
NIER's director Mats Dillen told Swedish media in October that he felt there was “a significant risk that prices are at unsustainable levels”.
“We are now starting to worry (…) we have to slow down the development of house prices (…) If we don't try to slow this trend there is a risk that there will be an abrupt fall in prices later, a crash,” he told Swedish broadcaster SVT.
There have also been concerns about a trend in city apartments being sold to hand-picked customers who are prepared to pay a premium in order to avoid bidding at auctions, the usual way homes are passed on in Sweden.
Sweden's Social Democrat-Green coalition has spoken out about rising prices and said it will invest in creating more affordable homes for students and first-time buyers in Sweden.
The government recently promised to set aside 5.5 billion kronor ($665m) for various projects in 2016, amounting to what Finance Minister Magdalena Andersson described as “the biggest housing political investment in 20 years in Sweden”.