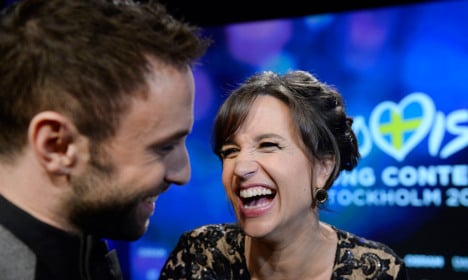 Already a household name in Sweden, Zelmerlöw shot to international fame when he and his stick figure gnomes won the finals in Vienna for Sweden with mega hit 'Heroes'.

“I am so incredibly happy to be part of the ESC bubble for one more year. Even more so about doing it with Petra, who I think is outstanding as a host and is also one of the most delightful people I know,” the artist told Swedish public broadcaster SVT.

“It is such incredible fun that I get the honour of being part of ESC 2016, and to be able to do this together with Måns is a dream,” said a delighted Petra Mede in response to her selection.

She too is a Eurovision Song Contest veteran. The comedienne, dancer and television host was the face of the competition when it was held in Sweden in 2013 as well as its 60th anniversary gala for the BBC.

“It's like when I was brave enough to go on the Flumeride at Liseberg [Sweden's biggest leisure park] for the first time. And then somebody tells me, when I'm there in a euphoria of happiness, that 'you get to do it again, with a super handsome guy',” she joked.

The Globe Arena in Stockholm was announced in June as the venue for the next Eurovision competition, which will take place May 10th-14th, three years after Malmö in southern Sweden organized the show.

Måns Zelmerlöw's victory with his track 'Heroes', was the Nordic country's sixth Eurovision title, with only Ireland scoring more wins (seven) in the history of the competition.