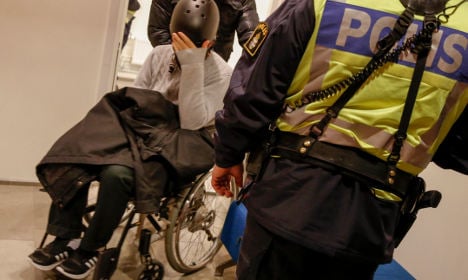 Hassan al-Mandlawi, 32, and Al-Amin Sultan, 30, both Swedish nationals, were found guilty by Gothenburg District Court on Monday of a series of terror offences, including taking part in the April 2013 decapitation of two people in Syria's second city of Aleppo.

The chief prosecutor in the case, Agnetha Hilding Qvarnström, had told the court that movies in which two men have their heads cut off, proved that the two accused were present when the murders were committed and that they belonged to a terror organization.

“The murder films have obviously been crucial, and the prosecutor has managed to show that it is those two guys who are in the videos,” the court's chairman, Ralf G Larsson, told the TT news agency after pronouncing the guilty verdict on Monday.

Neither man held the knife in the graphic films, but the court went on the prosecutor's line, who had argued it demonstrated their intention was to kill and seriously intimidate others.

The videos were shown in court, and Larsson said they had not left him unaffected.

“Every night when I've gone to bed I have seen a head hanging in the air,” he said.

The court also said it had been established that the two men had fought in Syria in spring 2013 because they sympathized with sharia laws advocating the creation of a caliphate.

Both men have consistently denied committing any crimes. The lawyer for the 32-year-old suspect previously argued that his client should not have been prosecuted because a gunshot wound to the head left him wheelchair-bound and unable to communicate.

He and the 30-year-old's lawyer both said they would likely be appealing the sentence.

“As close to certainty without knowing for sure, we will appeal this ruling. There is nothing else we can do,” the 32-year-old's representative Lars Salkola told TT.

The men were arrested in July in Gothenburg. The 30-year-old has been detained in custody since then, while the older man was forbidden to leave the city.