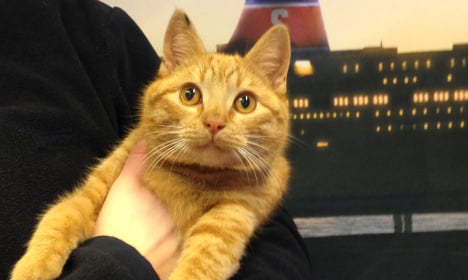 Do you know this cat? Photo: Stena Line

Polish ferry passengers heading back home over the weekend discovered the stowaway cat in their car when they reached the port in Verkö near Karlskrona in southern Sweden.

A video posted by a harbour worker on Facebook shows staff at ferry company Stena Line preventing the cat's numerous attempts to follow its new-found friends onto the boat.

The animal's owner had not yet been found by Monday afternoon, despite a social media appeal aimed at tracking down the apparently well-cared for pet having been shared more than 15,000 times.

“A wonderfully social and affectionate pussy cat, with clipped claws, who likes to cuddle and play with Christmas balls. Help us spread this post so that the Stena cat finds his way home to his owner as the best Christmas gift,” reads the company's message on Facebook.

The cat is currently staying with a member of staff and several people have offered to take care of the little adventurer if Stena Line fails to find his real home.

“I am convinced that this is going to have a happy ending, whether we trace the owner or not,” press officer Jesper Waltersson told the Sydöstran regional newspaper on Monday.

“We're looking for the owner, of course, but if they don't get in touch soon we'll have to settle for another solution: the second best. He has already charmed a lot of people, so there aren't likely to be any problems there,” he added.

The animal is not the only cat in Sweden to be hit by the travel bug this winter. Last month The Local wrote about Glitter – a pet who disappeared from his home in Sweden only to end up in southern France, 1,700 kilometres from home, eight weeks later.