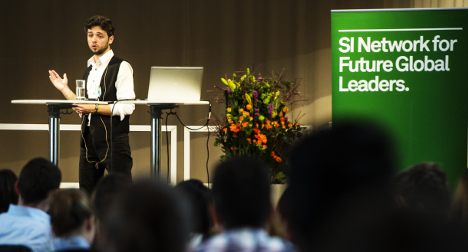 On July 2012 I graduated as the sixth class of the Biotechnology Engineering Dept. of the Technical Engineering Faculty at Aleppo University in Syria. The biotechnology department was recently opened in Syria and I enrolled in the third batch of students. My relatives and most of my friends kept calling me crazy and they were right: scientific research in Syria was not the best in the world. However, pursuing my personal passion has always pushed me forward.

There was no question about me proceeding with my postgraduate studies. For me, it was a must! Moreover, traveling abroad and discovering the world was my top priority. Therefore, combining these two goals would definitely be a wise decision. However, the world felt too far away for any Syrian at that time. Sadly, the peaceful revolution which started against a dictatorial regime in 2011 resulted in one of the most brutal conflicts since the World War II.

We were among those who were directly affected when the conflict started in Aleppo, forcing us to flee from the home where we had lived our whole life. Nevertheless, step by step, we started to gather the remnants of our life facing very difficult conditions.
My father opened another clinic in the opposition side of the city while we were living in the government-controlled side, forcing him to walk for an hour every day for months, passing through the conflict zone where regime snipers were killing people at random. But families that had nothing to lose except their lives were ready to risk everything in order to feed their children. My father was one of them and we were lucky to have our hero alive at the end of each day.

'I asked my family to go to Sweden'

For me, traveling abroad to pursue my studies was getting harder each day which resulted in starting my master’s program at Aleppo University where there was no electricity or sufficient resources for research. I had many countries in mind when applying for master programs and Sweden was on top of the list. Ironically, I never knew why.

I believe that sometimes it’s just a hunch or maybe some childhood feeling that you’ll never remember. Every time I read something about Sweden, it made me more determined. I think it’s likely because the ethical system that dominates Swedes’ hearts and lives, or maybe because of the high educational standards in research and development. Maybe it was that Swedes care about everything that matters to me – from sustainability to human rights – or maybe it’s just a young man who’s attracted to beauty and exaggerating a lot!

Unfortunately, my applications were rejected as they arrived too late. Meanwhile, one of my best friends applied from Dubai and was offered the study scholarship by the Swedish Institute to study in Lund University. He encouraged me to apply after having just finished the first year of master’s studies when our personal situation in Syria forced us to flee yet again. However, this time we decided to reach a peaceful destination. Consequently, I asked my family to go to Sweden, telling them that we’d find the peace we’d been missing for years.

Luckily, we started our life all over again here with a fast pace of productivity. I was lucky to get my residence permit, university admission, and the Swedish Institute scholarship offer in the same month! I was speechless, believing all future doors had finally opened. In addition, my father finished his Swedish language courses and received his work permission so he could carry on with his career as a dentist. And my brother is studying the higher levels of Swedish language and preparing to start his bachelor program in Sweden next year.

Even though it was not easy all the time, we are trying our best to participate actively as soon as possible in the society, with an aim to pay back for the generosity of Sweden.

From Uppsala to Lund

I started my master program in Applied Biotechnology at Uppsala University in the time when the Swedish Institute started initiating a pilot project establishing local networks of Network for Future Global Leaders (NFGL) in Swedish universities. This motivated me to join the board of the Uppsala Local NFGL network, working with passionate international SI scholars to organize projects that encourage democracy, leadership, entrepreneurship, human rights, and sustainable development among other things.

I met many brilliant students and lecturers who were truly inspiring. I made lifelong friendships with people coming from places as far afield as Gambia, Bangladesh, Turkey, Macedonia, and Sweden. We organized three main workshops that were successful in reaching our goals. Moreover, we secured the sustainability of the local network.

The Swedish Institute, like any other Swedish organization, holds the noble goal of connecting scholars from different parts of the world, encouraging leadership, sustainability, and human rights among other principles.

Ironically, motivating students to attend the lectures wasn’t that simple, forcing us to raise awareness about necessity of these lectures to development as future leaders. The Swedish Institute responded by asking me and Sara Mitchell to hold a seminar in the last kick-off describing the goals and projects of NFGL and the local networks. Interestingly, students responded very well and new local networks were formed at different universities.

My best friend from Syria who I’ve known since 2005 was one of them and he was admitted to study in Lund University. We all met in the kick-off and spent two amazing days in Stockholm. Meeting my best friend after two years of being afraid of losing him was a great relief. It was a meeting that would never have been possible without the Swedish Institute. Thanks to them, it did indeed happen.

Since two of my best friends were in Lund, the time to experience another astonishing historical city had come. I decided to do the second year of my master’s program at Lund University and I was happy to get the opportunity to do my master’s thesis at the Immunotechnology Department at Lund University. Here I met new friends, sharing their values and spreading the word of science and prosperity together.

I had the chance to join Lund Local NFGL network where I planned and conducted a joint project with Uppsala Local NFGL network visiting the marvelous city of Visby in Gotland. We had a workshop in the pioneering Ecovillage of Suderbyn and we visited the SI Baltic Sea Region office. It was a productive trip in all respects. We had a sightseeing tour and learned more about the distinct projects of the Visby unit of SI in the Baltic Sea Region. In Sudebyn, we met the active change-leaders working with real commitment to achieve the best possible sustainable lifestyle.

More importantly, students from both networks met and had the chance to mingle and get to know each other.

At the moment, I’m enjoying the gloomy winter weather in south Sweden while doing research on lymphoma. I have many different ideas concerning my post-graduation future, ranging from entrepreneurship to Ph.D. positions. A variety of ideas and big plans are waiting to come true.

However, the importance of being active in NFGL and stepping up with more projects for developing our skills is unquestionable. This is what I recommend to every SI scholar whether he or she is an alum or still studying. NFGL is one of the best opportunities I’ve ever had. It helped my understanding of myself and of a society seeking improvements and development. It gave me friends that I’d never have met otherwise.

Being in Sweden has given me different prospects for life and new goals to achieve. It made me believe that if you want to change something, you can. All you really need is to believe in yourself, and Sweden is ready for you to start spreading your message worldwide. We should all stay open and take the initiative without being afraid of change. Otherwise we’ll be standing still in a fast-changing world which means that we’ll be lagging behind.