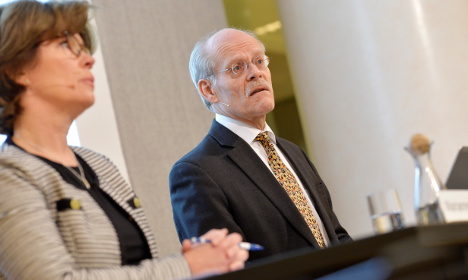 The Riksbank announced it would keep the so called repo rate at unprecedently low levels. However, it did not rule out cutting it below the current –0.35 percent in the future.

“Developments in the Swedish economy have been somewhat stronger than expected, while uncertainty remains globally. There has been an upward trend in inflation since last year, but it is not yet on a firm footing,” the bank warned.

The krona jumped by 0.4 percent to 9.28 per euro and 8.4 to the dollar immediately after the announcement as Stockholm's stock exchange breathed a sigh of relief.

The bank also adjusted its GDP forecast on Tuesday, saying it believed the economy was set to grow by more than three percent in the next three years, in the wake of record numbers of refugees arriving in Sweden.

“It has a stimulating effect, so GDP grows. We have added a few tenths in the coming years,” Stefan Ingves, head of the Riksbank, told a press conference on Tuesday.

“In the long run, the big question is what will happen to the people who come to Sweden.”

His comments on the economy echoed a report carried out by the Nordea banking giant last month, which estimated that GDP growth could rise by 0.5 percent more than previously predicted in 2016.

It linked the increase to a variety of factors, from the need for additional accommodation making more money for the building industry to more teachers being hired to help teach refugees.

The Nordic nation first slashed its interest rate – the repo – below zero in February in a landmark decision. It's national bank continued to cut rates in subsequent months, with the -0.35 rate introduced in July.

The Riksbank is hoping that its financial strategy will boost inflation in order to raise the price of everyday goods and services in Sweden which have been stagnant for two years. It has argued that this in turn will improve the country's economic prospects.

However Tuesday's decision to hold the repo at -0.35 is bad news for savers in Sweden who will continue to see no return on any nest eggs stashed in basic savings accounts.

But those wishing to borrow money to buy properties or shares will continue to benefit from the record low rates.