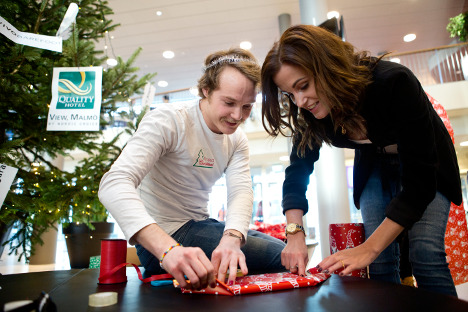 Malmö University students are busy. Wrapping Christmas presents for people they will never meet nor see the joy that perhaps those gifts might bring.

It almost seems too fitting that these eight students are from the Peace and Conflict Studies Bachelor’s Programme, and that these gifts will be distributed to young victims of the increasingly worsening refugee crisis.

It is all part of Project Christmas, an initiative which aims to collect presents from students, staff and anyone else they can appeal to. Having been in contact with the refugee centres, they have identified that the prime group most in need is 12-17 year old boys, of which there are currently around 2,000 residing in Malmö.

“This was done last year, and it was done quite successfully, however the refugee crisis has increased drastically and so the need is bigger than ever. Our teacher recommended we repeated the project,” explained Julius Borgqvist, one of the organisers who is studying on the international programme.

“Before you can get on board it helps to have an understanding of the problems. You get a lot of knowledge from reading about conflict – not just seeing it on the news – but also being able to analyze academic articles where you get a more complex understanding of the conflict.

“Seeing the refugees in the city makes you feel compassion. What we’re doing won’t solve the problem, but still it's for the better; it will bring some kind of light to their everyday lives.”

These ideas of understanding, empathy and social justice are actively encouraged by staff at Malmö University. As the refugee crisis worsened, the fund-raising and awareness campaign ‘Malmö University for Refugees’ was launched. It aims to engage students, staff and the community through education and grass roots aid.

Marisol Pérez O'Connor, vice-president of the Student Union, is studying toward international bachelor’s degree in Human Rights and just needs to complete her thesis before graduating.

“I think the course encouraged me to get involved with the project, but it wasn’t so much the course, but more the people you meet while you are studying human rights. There are so many people from so many different backgrounds that you actually get to learn more about what is going on in the world.

Read also: Why Malmö has it all for international students

“One of the things that got me involved was having a friend in the union from Syria. You hear so much about what's going on in the news, but when you actually talk to someone who has experienced it, it feels so much more real.”

Students are encouraged to develop their own initiatives and Mexican-born Marisol came up with the idea of a language café. It now meet once a week and is attended by around 40-50 refugees aged 15-18 years old.

“It is one moment when we forget they’re refugees. We’re just there for the Swedish skills. We want them to forget about the situation, we want them to feel like they’re just students studying Swedish,” she says.

“They may not talk about their gratitude, but they show it incredibly much. They are super-excited and happy about being there. We’ve been told they keep on talking about it and practising what they have learned.

“If we talk specifically about Syria, five years ago it was not where it is now, things just escalated in such a quick period of time. They were just normal people who did not know their lives were going to change any second. They were not able to leave when they realised there were problems.

“They are just people who were in a safe country which is no longer safe, that could happen to anyone and I think people fail to see that. People don’t think of the fact that within the last few hundred years, Sweden was one of the poorest countries in Europe and many left because they were starving.

“Not any university would have done this kind of thing. It is not about the image, it is more honest than that – it is for the sake of it. It has not been set up to take a few photos and forget about it.”

Students have also been formulating ideas to try and help female refugees and encourage them to seek out education and to be more engaged in society. Keeping young children who cannot attend school entertained and busy has also been a focus, along with educating westerners about the plight of the refugees who they fear are being dehumanised.