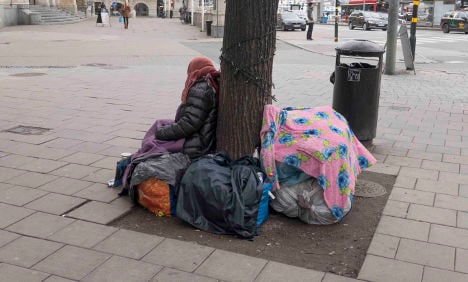 Roma beggars up and down the country have been questioned about their income, whether or not they beg voluntarily or under duress and if they pay others to be guaranteed a certain spot in a town or city, Swedish Radio programme Ekot has revealed.

The show interviewed Roma who had also been asked to show photo ID cards and other identification during spot-checks by police and to give details about their home towns. The information, gathered by regional forces, has been pulled together to create a form of national register, released earlier this month.

Police speaking to the public service broadcaster said that the move was necessary in order to fully investigate potential human trafficking linked to begging.

“If we in the police see that there is a vulnerable person that we suspect may fare badly, we need to ask questions of care,” Linda Staaf, Director of National Intelligence, told Sveriges Radio.

But Hans Caldaras, a spokesperson for the Roma community, said that the study was an excuse to compile statistics based on ethnicity (which is not usually done in Sweden) and to get Roma “out of the country”.

A previous similar initiative co-ordinated by police in southern Sweden in 2013 was severely criticized by Sweden's parliamentary watchdog, and those included in the register were awarded damages.

As migrants from elsewhere in the European Union, Romanian and Bulgarian Roma can easily travel to Sweden as tourists under the EU's right to Freedom of Movement, without the need for a visa or a work permit. There is no law against begging in Sweden.

Research by Swedish broadcaster SVT in April suggested that the number of EU migrants from Romania and Bulgaria had more than doubled in the preceeding 12 months, to around 4,000 people.

However a report by Scandinavian social research foundation Fafo in March found that there was no evidence that Romanian beggars in Sweden or other parts of the Nordics were being managed by organized criminal groups.