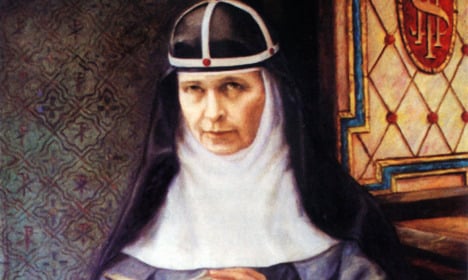 Representatives of Pope Francis announced plans on Wednesday to canonize Elisabeth Hesselblad, whose portrait already hangs in St Peter's Basilica in the Vatican. She will be following in the footsteps of Saint Bridget (Birgitta), who was canonized in 1391.

“She is truly an example of concrete mercy. In the middle of the German occupation of Rome she hid several Jews in the convent in Piazza Farnese and organized a makeshift synagogue,” wrote Anders Arborelius, Bishop for the Catholic Church in Sweden, in a statement.

Maria Elisabeth Hesselblad was born in 1870 and died in Rome in 1957. She was beatified – the first step before sainthood – by Pope John Paul II in 2000. She worked as a nurse in the United States when she converted to Catholicism.

Sweden is the least religious country in the Western world and the Lutheran Swedish Church loses about one percent of its members every year.

But news of the secular country receiving its second saint in history created big headlines on Wednesday, with the story trending on Twitter and on social news site Sociala Nyheter.

Gunnar Sjöberg, head of communication for the Swedish Church, argues that many Swedes are believers but do not wish to talk openly about their feelings when questioned by researchers.

“In Sweden compared to other countries, religious beliefs are very personal, people don't talk about religion a lot in everyday life. But when we speak to people about whether or not they pray, they often say 'yes',” he told The Local in April.