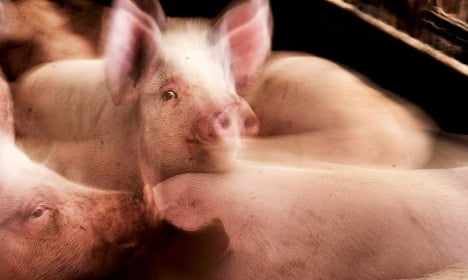 Has anyone seen a 110-kilo pig? Photo: Lars Pehrson/SvD/SCANPIX

The 110-kilo heavy sow made her great escape at the eleventh hour, just before she was to meet her tragic end at an abattoir near Sölvesborg in southern Sweden.

“A number of pigs were being offloaded at a slaughterhouse, and one pig ran off and has not been traced since,” police officer Bo Olsson told the Expressen tabloid on Wednesday.

While people in countries such as the US and UK feast on turkey during the holidays, in Sweden the Christmas ham takes centre stage on the traditional smörgåsbord.

But neither the butcher nor the police have been able to find the swift swine.

“Of course we're allocating huge resources… haha, no unfortunately we don't have time to look for her actively. But if she shows up we can help catch it. Some probably hope she'll be caught before Christmas,” police spokesperson Anders Wahlberg told public broadcaster SVT.

However, Olsson commented: “She survived the Christmas smörgåsbord this year.”

It is not the first time an animal has made a final attempt to survive slaughter. Just last month a cow went on the run in Galicia in Spain. However, the frantic animal died when she fell from a viaduct while fleeing police.

But a young heifer who was caught after she escaped from an abattoir in France this summer was spared from slaughter. It was revealed the later pregnant cow would be allowed to spend the rest of her life with her calf at a farm near Paris.