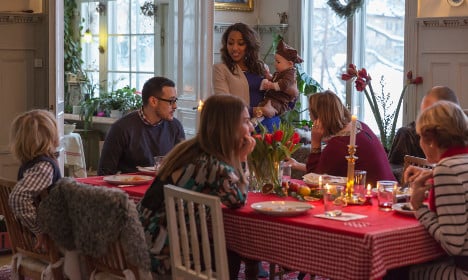 What Christmas in Sweden looks like. Photo: Carolina Romare/imagebank.sweden.se

It's the most wonderful time of the year. But what if you have no one to spend it with?

While Swedish families are set to gather next week to open presents, crack nuts, laugh, drink glögg, and dine on a smörgåsbord of festive goodies – for others the sting of loneliness makes itself ever more present during the holiday season.

That's what Berith Ljungström thought when she put up an online advert extending a hand of friendship and a seat at her family's Christmas table this year to all those facing a lonely holiday season. Within less than two days she received more than 100 replies.

The mum, her husband, her dad, two daughters and a foreign exchange student living with them now look forward to sharing their Christmas celebrations with people who have nowhere else to go for the holiday.

“We're going to invite six people. Who, doesn't matter. But we're probably going to invite a mix of people and prioritize those who really need it and have perhaps never celebrated Christmas before,” the 41-year-old tells The Local. Berith Ljungström, second from left, with her family. Photo: Private

Swedes are expected to spend a record 75 billion kronor in the stores during the holiday season, according to figures from retail organization HUI Research.

“Christmas is a sensitive time. A difficult time for those who don't have financial resources or other problems,” says Patrik Thörnqvist, 29, who is also inviting strangers to spend Christmas Day with him and his partner Eleonoré Ragnarsson, 25, at their home in Kalmar.

He informs The Local that several organizations and local shops have already been in touch to donate presents and food.

Any leftovers will be passed on to homeless charities or asylum centres housing some of the more than 150,000 refugees who have arrived in the Nordic nation this year. Some, failing to find accommodation, have been forced to sleep in churches, sports halls or even the street.

Yet the crisis has also prompted the usually reserved Swedes to step out of their shell, and Ljungström and Thörnqvist are far from the only ones to open their doors to strangers this Christmas.

“I see it as a little thing that means a lot. You have to cook food and celebrate Christmas anyway. It doesn't take up a lot of energy to let more people celebrate with you,” says Jeannette Sinn, 30, from Klagshamn in southern Sweden, who also put up an online advert offering to share her family's Christmas joy.

“Swedes are very closed. Especially at Christmas. It is so ingrained that Christmas is for the family. But taking in strangers doesn't ruin that.”

INTERVIEW: 'How I got Swedes and immigrants dining together' All three families reveal they have been fielding calls from some of Sweden's biggest media organizations after news of their kindhearted efforts spread on social media.

“I never thought it would become this big. We didn't think media would pay attention to it. But we need positive news right now. It's contagious,” says Ljungström.

“Swedes are maybe socially reserved. But I think we're starting to care more and more for each other than we did before,” adds Thörnqvist.

READ ALSO: Is Sweden the worst country for making friends?