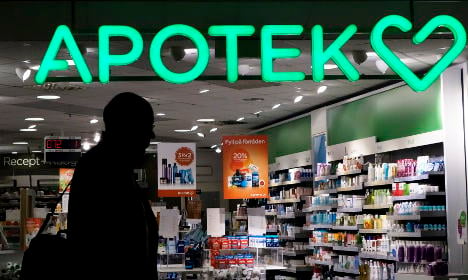 A Swedish pharmacy. Photo: Hasse Holmberg/SCANPIX/TT
All children living in Sweden will qualify for free prescription drugs from January 1st 2016, when a new law comes into force designed to reduce health inequality.
The move changes the current policy, which asks mothers, fathers or guardians to contribute towards their children's prescriptions, with costs capped at 2,200 kronor ($257) per family. Parents are asked to collect stamps on a paper card to demonstrate when they have reached the upper limit of drug purchases.
Sweden's parliament voted to change the process earlier this year, in order “to enable health care on equal conditions for children and reduce health inequalities between different socioeconomic groups”.
Expat children living in Sweden will be entitled to the benefits, as well as asylum seekers and under-18s staying in the country illegally or without paperwork.
Some drugs will however be exempt from the new policy, including certain herbal remedies and anti-smoking prescriptions.
The Swedish union representing the pharmaceutical industry said on Friday that it remained in favour of the plans, but again raised earlier concerns that the new law had not been thoroughly thought through and was “remarkably ill-founded”.
The move to cut drug costs for parents comes alongside a number of other health care reforms that have been pushed through recently, including free mammography scans from the end of next summer and onwards, and free contraceptive pills for women under the age of 20, a move that will be rolled out after summer in 2017.
Sweden is also set to raise the maximum age for free dental care from 19 to 23, between now and 2018, after announcing the move in September.