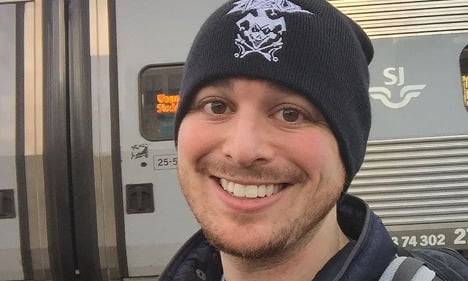 Greg on a trip to Gothenburg in west Sweden. Photo: Private
Clean-shaven and wearing a crisp dark red shirt along with a wide, white smile, Clayman is about as far away from the stereotype of a heavy metal fan as you can get. Yet it was his taste in what he describes as “really shitty music” that first brought him to Scandinavia in 2014.
While on vacation from a communications startup in California, he dragged his then girlfriend along to the Rockstad festival in Falun in central Sweden as part of a whirlwind of Nordic tourist hotspots. He fell in love with the country's green, clean capital along the way.
“I just really liked it out here, and being in my late twenties and having kinda that 'quarter-life crisis', I was like 'this is the chance that I have to move',” he explains. Greg enjoys Sweden's outdoor lifestyle. Photo: Private
Eight months later, the US graduate had landed a job as a recruiter for online payment firm Klarna, one of Sweden's leading tech companies.
“I was at a startup before this and there were 10 people when I started and 20 people when I left, and I wanted to be in a place growing a lot faster than that,” says Clayman, who previously worked in San Fransisco and Los Angeles.
His dreams came true after he sent a speculative email to a recruitment manager at Klarna, who got back in touch when a vacancy came up shortly afterwards. Clayman is among 540 people hired by the Swedish firm in 2015, which currently has 1,300 people on its books, after launching a decade ago.
Now, he's helping to recruit the next generation of top talent for the Nordic business, and says he's loving almost every minute of it.
“It's a payments company. So it's not sexy like Spotify for example. But the thing is, what we are doing here is really, really unique and revolutionary for the payments industry. It really is disrupting online payments,” Clayman argues.
READ ALSO: 'I invest my own money, take my own risks'
Klarna's technology is designed to help people to buy products quickly but pay up later, without the hassle of having to fill in rows of personal data or registering the card they plan to use. The company can approve customers based on a tiny amount of information, such as an email and delivery address, which is then used to trace their credit history. Only once the products bought online have been shipped and received, does the buyer have to pay an invoice.
“It's quick and clever and secure,” argues Clayman, clearly used to promoting the company's message.
But he is refreshingly open when discussing his own payment by Klarna, admitting that he took a “massive, massive pay cut” when he joined the firm in April and sometimes still longs for the Silicon Valley bubble he was initially so desperate to break out of.
“The biggest physical possession I miss is my car. I had an awesome car in the bay area, that was like the coolest thing I will ever own,” he says, lamenting the loss of his Mercedes SLK 350.
“Now I walk to work in the freezing cold,” he jokes. Greg's old car, a Mercedes SLK 350. Photo: Private
However the former communications student, 28, says he is thriving in Klarna's working environment, which provides regular opportunities to meet and socialize with staff members hailing from more than 40 different countries.
“What's great about Klarna is that the average age is 31. Everyone I work with is awesome. And that's what they told me when I interviewed: 'we don't have any douchebags on the team', and so I was like 'cool, I get to be that guy now' Ha!”.

New employees are joining us this week. Welcome everyone! ⭐️ #insideklarna #klarna pic.twitter.com/sPp09kOdCR

Clayman's goal for the New Year is to grow his network, candidly admitting that he currently has “no life outside of work”. The recruiter suggests that this is mostly due to putting in “very long hours” in order to prove himself in his new role. However, he is also incredibly vocal about his struggle to get along with Swedes.
“In the US if I go to a bar and watch an Amercican football game – which I would do by myself if my friends weren't available – I could meet people there and talk to them about things,” he explains.
“People just aren't super friendly here. You can tell the Swedes that I don't think they are friendly,” he laughs.
In the meantime, the former university track and field coach says he is filling his rare spare time with running, cycling, ice skating and dating and remains “super happy” he took the gamble to live and work in Stockholm.
However, Clayman admits that his opinion could easily change once he's seen out his first winter. He hates the cold so much that as a student he transferred from US Ivy league college Brown to Pepperdine University in Malibu after just one year, all because he couldn't cope with the freezing temperatures.
“I think yesterday was about the coldest weather I have ever been in,” he says, slightly nervously.
“It's getting cold and I don't know if I am mentally or physically prepared for it right now!”