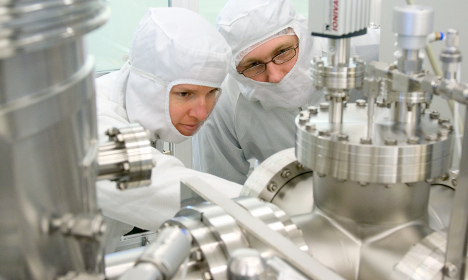 Scientists working at a lab in Sweden. Photo: Jan-Olof Yxell/imagebank.sweden.se

According to the Innovation Indicator 2015, Sweden reached just 10th place in the worldwide innovation stakes, behind countries including Finland, Germany, Austria and the United States.

It means the Nordic country has dropped from second in the table a decade ago, for which the authors of the report blamed a lack of investment in education and research.

“The Swedish education system has clearly lost out on quality which is visible in the Pisa results. In addition the budgets for public services such as education and administration have not been substantially increased since the middle of the 2000s, which is why performance as a whole has declined,” read the report.

However, it also recognized recent moves by Sweden to boost innovation industries and predicted that “for the future certainly more is to be expected of Sweden than this year's place at the end of the pursuer group”.

The Innovation Indicator assembles data from 38 different sources to provide a single score for how innovative an economy is, including a country's science and research base, state support for innovation, education levels and many more.

It is put together by the Federation for German Industries to assess the state of Germany's top competitors on the international market for innovation, tech, startups and businesses.

The report comes just a month after a global ranking looking at how countries develop, attract and retain business talent put Sweden 11th place, down two spots on 2014 and well below its Nordic neighbours.

The World Talent Report by the IMD World Competitiveness Centre said at the time that Sweden's sliding ranking was affected by poor performances on criteria including a lack of emphasis on science in schools and falling Pisa scores used to measure educational levels internationally.

However, despite dropping in some rankings, Sweden has performed better in other recent business research focusing on its mushrooming startup industry.

In October the capital was ranked among the top three best European cities for startups in a survey on which praised the Nordic country for its digital infrastructure.