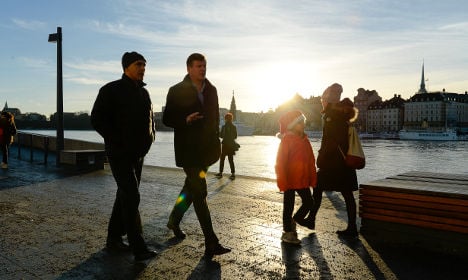 The sun shining in Stockholm over the weekend. Photo: Anders Wiklund/TT

A four-decade-old national weather record almost saw itself beaten over the weekend, with the mercury climbing to 13.7C on the Baltic island of Gotland on Sunday. Similar temperatures were last recorded on Christmas Eve in Simrishamn in southern Sweden in 1977.

Local heat records were wiped out across the country: Halmstad, Gothenburg, Ulricehamn, Skara, Karlstad, Örebro and the island of Öland in south-western Sweden all enjoyed soaring temperatures. Stockholmers basking in the sun on Sunday. Photo: Anders Wiklund/TT Those readers hoping to enjoy a ski holiday in Sweden can relax. Some of the Nordic country's biggest snow sport resorts have promised they will not buckle under the sleet.

“We, and almost all other alpine centres, have invested more and more into the possibility of making snow. We need fewer cold weather days to get the slopes in shape,” Jonas Bauer, destination head of the Skistar centre in Sälen, told TT.

And Niclas Sjögren Berg in Åre said: “If you compare to the past two years it's far better than it was then.”