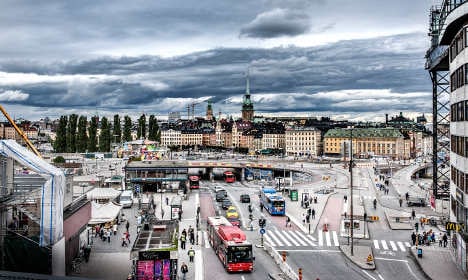 The National Institute of Economic Research (NIER), which analyses economic forecasts for Sweden, announced this week that it believes the country's gross domestic product – the value of goods and services produced over a year – will grow by close to four percent this year and in 2016.

In many ways, this is a surprise growth curve which may seem counter-intuitive after a turbulent year. But economists Elisabet Kopelman and Magnus Alvesson of banking giants SEB and Swedbank have told The Local that sometimes the cloud is in fact the silver lining.

While Swedish authorities have been struggling to cope with the country's record intake of asylum seekers this year, experts have predicted that the crisis could actually boost the national economy.

“We have to provide accommodation, health care and so on for those who come here. This means a higher demand for those things, and that more people will consume,” explains Kopelman. Sweden is battling a severe housing shortage – the public housing queue for an apartment in Stockholm currently has an average wait of eight years. But economists argue that this is another 'crisis' that could have benefits for the economy in the long run, especially as more accommodation is being built.

“Investment in housing is increasing and this contributes to growth,” says Alvesson of Swedbank, while Kopelman of SBE argues that “this is strongly linked to the rising number of refugees; we simply need more accommodation”. There's an important ripple effect which essentially means that if many big countries are doing well, everyone's doing well. Both the European and the US economies are well on the road to recovery after the financial crisis, which gives Sweden a boost, too.

“There are still many uncertainties, such as the economy in China, but overall it looks quite good. But if China's economic growth slowed down, this would have huge consequences on the Swedish economy,” warns Alvesson. The global market is getting back on its feet. Photo: AP Photo/Mark Lennihan

Sweden's central bank's decision to cut key interest rates to record low levels this year has seen the krona drop sharply against international currencies, with as many as 9.79 kronor required to buy a singly euro on December 22nd. This has a bunch of added benefits, including attracting more foreign tourists happy to spend their dollars, pounds and euros in the Nordic country.

READ ALSO: What does the weak krona mean for you? The low interest rate also means that Swedes are more happy to open their own wallets, but there's also that ripple effect again. If the economy is doing well, people feel more confident about consuming. Sweden's Prime Minister Stefan Löfven has pledged to have the lowest unemployment in the EU by 2020 and the number of jobless people is indeed going down, which means “higher incomes for the households which leads to more consumption”, according to Alvesson.

However, experts have also warned that the high unemployment rate among foreign-born people will present a challenge in the future.

“Many of those who come to us are quite far from entering the labour market. They have a longer distance to go to be able to get a job, and require more assistance,” said Sweden's employment agency Arbetsförmedlingen's chief analyst Mats Wadman in November.