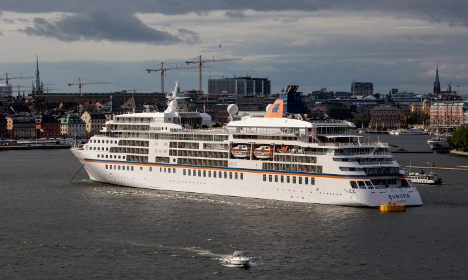 A cruise ship in Stockholm this summer. Photo: Christine Olsson/TT

In November The Local reported that Migrationsverket was hoping to use cruise ships to ease a housing shortage for the record number of people who have travelled to the country in 2015.

The refugee influx has eased since, but authorities are still working to find long-term accommodation to where they can transfer people still staying at emergency housing centres for asylum seekers.

The agency revealed on Wednesday that a passenger ship owned by Gothenburg firm Accumul8or Invest AB has agreed to make available beds and cabins for up to 1,260 people.

“It's nothing we're used to. It's new for Sweden and it's also new for the shipping industry.”

It has not yet been announced in which port the vessel will be moored, although large harbours previously mentioned are Stockholm, Gothenburg, Malmö, Oskarshamn, Uddevalla and Gävle.

Migrationsverket said last month that it hoped it would have the first asylum seekers ensconced on a cruise ship by Christmas. However, it has now said it expects it will be ready by early April.

“We hope things will move faster, but we have to set a limit. We can't wait forever, in that case we may have to think differently,” said Åberg.

More than 150,000 refugees have travelled to Sweden in the past year, the most per capita in the EU.

However, the country has seen a nationwide dip in the number of people claiming asylum in recent weeks, following news of tighter border checks and a government announcement that it would cut the number of residency permits made available.

While in October around 10,000 people were registered in a week, 2,927 people have filed asylum claims in the past seven days, according to Migrationsverket's most recent set of statistics, released on Wednesday.