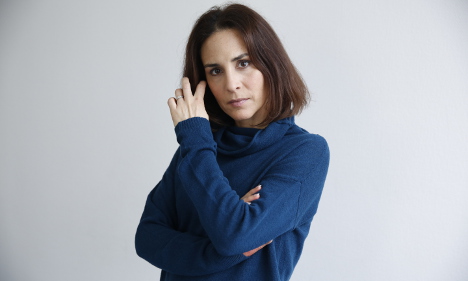 “Gåsmamman is not a typical Nordic Noir,” Rapaport tells us. She plays Sonja in the show, a Stockholm mother-of-three and accountant at a local marina – and, after her husband is shot in a drug deal gone wrong, heir to a marijuana empire.

“There are lots of morally questionable characters but they still have some likeability, there is always a balance,” Rapaport explains. “There is hope, there is humour.”

Indeed, alongside the obvious comparisons to Scandinavian thrillers The Bridge and The Killing, reviewers have drawn likenesses with American show Breaking Bad, because of the show's humorous side despite its dark subject matter. Rapaport promises that although the first few episodes start out relatively light, the show gets darker and more fast-paced as the series unfolds – but humour is always there, central to the series. The title of the show encapsulates this: Gåsmamman translates as Mother Goose, referring both to the protagonist’s protective nature towards her family and to the goose farm which acts as a cover-up for the marijuana farms. Plus, ‘goose’ in Swedish is slang for the drug.

But according to Rapaport, “the most important difference [between this and others in the genre] is that this is not a show about police or detectives, it’s about a family who gets into trouble.”

Intense scenes of deals, threats and shoot-outs are interspersed with the women of the family preparing for Sonja’s sister’s wedding, and arguments between the two sons.

“I really wanted people to feel that Sonja is a regular person, that’s important,” says Rapaport, emphasizing the contrast with the female leads of other Nordic Noirs, such as The Bridge's Saga Norén and The Killing's Sarah Lund, both of whom struggle with social interactions and relationships.

“The family scenes are not there just to soften up the thriller sequences,” Rapaport adds. “The children have their own lives and it’s all part of the plot – it’s not a time to leave and make a coffee, it all ties together to make a tight story.” Rapaport herself is a mother of two young children, and says she found the family scenes easy. “But when it came to the conflicts around drugs and gangs, I had to use my imagination!” she laughs.

However, Sonja’s role as a mother is central to why she gets caught up in the world of drug dealing. “I can understand why she makes these decisions, and I hope that viewers can relate to the family scenes and understand her,” says Rapaport. “She has a huge conflict around drugs, she does it because she wants to save her family. She is braver than me – I would never go that far!”

Sweden has a strict no-tolerance policy on drugs, but Rapaport says the series doesn’t aim to make any political statement. “Drugs do support Sonja at the start of the story, but it shows that if you get involved with drugs, it will always turn out bad. We also show how Swedes relate to drugs. Although Sonja accepts growing marijuana, when her son uses ecstasy she goes mad – that's part of her conflict.”

Unlike other shows in the genre, Gåsmamman doesn’t use the atmospheric natural landscapes to complement the harsh story. “We show city views that appeal to tourists, but you recognize everyday life. We have scenes in homes, schools, people going shopping; it shows how we live and interact. This is the true life of Swedes – it's realistic.” Rapaport says that the global success of the Nordic Noir genre has opened up many more opportunities for Swedish drama. She is also co-producer for Gåsmamman – her first producing role – and so was creatively involved in the decisions from start to finish, but she says the hardest part of making the show came before filming began, “waiting for the money, trying to stay calm and not give up.”

Gåsmamman will get its television premiere on Swedish network Kanal 5 in early 2016. The series has already stated  received positive reviews from Swedish journalists since it began showing on Swedish online channel C More in late November.

At the moment, it isn’t certain if it will be broadcast internationally, but Rapaport is hopeful that audiences will relate to the story, and homegrown interest will translate to a wider viewing public in future.

“We want to show it to as many countries as possible. I think it will appeal to people – it’s a great story, it’s exciting, I think we have everything!”

Run in partnership with Stockholm's investment promotion agency Invest Stockholm, the multi-channel 'A Woman's Place' initiative features a series of articles and podcasts produced by The Local's in-house Creative Studio. Each piece of native content promotes Stockholm as a gender equal city where women can achieve their professional and personal potential.

“The time is right for an initiative like this,” says The Local's Commercial Editor Sophie Miskiw. “In the wake of #MeToo, Invest Stockholm wanted to show that efforts are taking place in the city to make it a more equal place for both men and women. We've used real stories to illustrate these efforts and share them with an international audience.”

Since launching the initiative on March 8th, 2018 (International Women's Day), The Local's Creative Studio has produced three articles and seven podcasts which have generated over 9.6 million social impressions.

Invest Stockholm has also called on Stockholm-based companies to declare themselves 'A Woman's Place', publicly confirming their commitment to gender equality. To date, 94 companies including unicorns Spotify, Klarna and iZettle have joined the initiative.

“The Local's readers are very value-driven, so this initiative really speaks to them. The series comes alive through real stories, real people and real values – and that's why it is so successful,” says The Local's co-founder and CEO James Savage. “We look forward to continuing the initiative and seeing how far we can take it.”

To find out more about advertising on The Local, whether you're based in Stockholm or any other cities around Europe, email a member of our team, or call +46 8 656 5019.