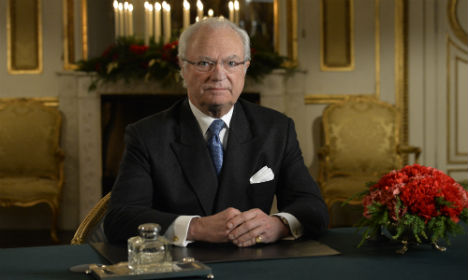 "The world has come close to us," the king said. Photo: Jonas Ekströmer/TT

“In November, 130 young people lost their lives in a series of coordinated attacks in Paris. The attacks touched us all,” the figurehead monarch said in his 15-minute long speech.

“The openness and trust that have thus far reflected our society can’t always be taken for granted. Not here in Sweden either. We have to care, and stand up for, these values,” he said.

The king also spoke about the migrant crisis, during which the tiny Nordic country of 9.8 million has taken in 160,000 asylum seekers this year alone, saying that the current unrest in the world “has come close to us in a way that we haven’t experienced in a very long time in our country.”

“There are 60 million people in the world who have fled their homes. Some of them have come to seek shelter and a future for themselves and their children here in Sweden. Our willingness to help these people is very strong,” he said.

He also expressed joy over the fact that the world finally struck a climate deal in Paris in November,

He then thanked the Swedes for their support throughout the year.

“Your heartwarming words and wishes means a lot to us in the family.”

The king’s speech can be found on Swedish Radio’s website and will be aired by national broadcaster SVT at 7:45pm Friday evening.