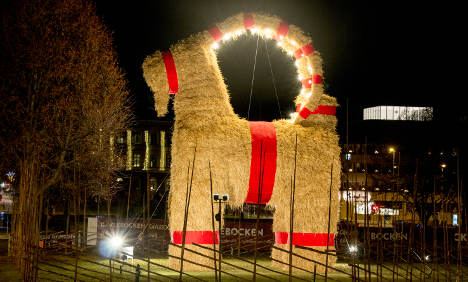 Sweden has many hidden gems and Gävle definitely fits in the category. Despite being home to 100,000 citizens, it rarely grabs international headlines. But it has made its mark. Here are seven very random facts about the unique city.

1. It is the home of Sweden's straw yule goat, Gävlebocken (The Gävle Goat)

Gävles most famous celebrity is without doubt Gävlebocken (The Gävle Goat). The huge animal is put up every Christmas and last year travelled all the way to China afterwards. As much as the goat itself is a tradition, so is burning it down. So far the goat has been set on fire more than 30 times by locals and the different ways of setting the three tonne straw goat on fire seem to get more creative each year. The goat also has its own Twitter, Instagram and blog.

2. The world famous coffee Gevalia is from Gävle

It's no secret that Swedes are obsessed with coffee, and Gävle is the home of the world famous coffee company Gevalia, which roasts 200 tonnes of the brown stuff everyday. The line “när du får oväntat besök” (when you get unexpected visit) is well known among Swedes. If you don't drink Gevalia when you live in Gävle, you break a really serious unwritten rule.

3. Gävle is the birth place of Ahlgrens bilar and Läkerol
Gävle is also home to some of Sweden's most popular candy. The company behind Ahlgrens bilar (which is sold with the tagline “Sweden's most bought car”) and the pastille Läkerol started life in the city. Gävle's ice hockey arena used to be called 'Läkerol Arena'. Ahlgrens bilar is from Gävle. Photo: Janerik Henriksson/TT
4. Cat Stevens used to live there
This is probably the most random fact about the city. The globally renowned singer and songwriter Cat Stevens lived in Gävle with his Swedish mother after his parents got divorced. He went to one of the town's local schools for six months. He once gave an interview with popular Scandinavian talkshow Skavlan, describing his time in Gävle as amazing, because it made him realise that he was a star. Cat Stevens used to live in Gävle. Photo: Chris Pizzello/TTnyhetsbyrån
5. You can fish for salmon and sea trout for free, in the city centre
The river Gavleån runs right through Gävle, which give the locals the luxury of being able to fish for salmon and sea trout in the middle of the city. However you need a valid ID card and a ‘fish card’ to prove that you know what rules to follow. The city wants to keep this luxury and are officials aren't keen on newcomers rocking up and doing things the wrong way. In Gävle City you can fish for salmon. Photo: Gävle Kommun
6. Gävle Concert Hall is a giant bathroom covered in 169,000 blue tiles
To find bathroom tiles in most cities you need to go into someone's bathroom. In Gävle there are 169,000 of them inside a concert hall. The largest room in the concert hall is called The Gevalia Room (yes, we told you locals are very proud of their coffee) and can fit up to 819 people. The hall is also the home of one of Sweden’s seven symphony orchestras and will in 2016 feature performances with some of Sweden's hottest pop icons including Seinabo Sey and Miriam Bryant. Gävle Concert Hall is covered in 169.00 tiles. Photo: Gävle Kommun
7. Gävle hosts one of Sweden's biggest city parks
It is not exactly New York's Central Park, but Gävle’s Boulongerskogen is a stunning green space close to the river Gavleån, and it is one of Sweden’s biggest city parks. Here you can enjoy mini golf, go for a swim in the river, participate in some of the training sessions organized in the park during summer, or simply enjoy a nice crisp walk over the winter.