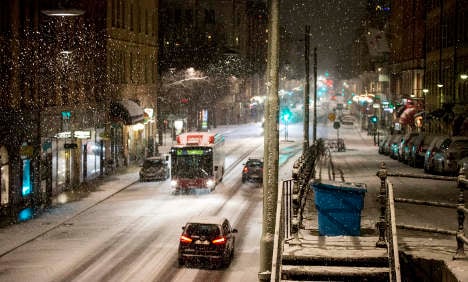 Stockholm remained covered in snow on Monday, causing a slippy and chilly start to the day for Swedish residents returning to work in the capital between the Christmas and New Year breaks.

Sweden's weather agency, SMHI reported temperatures of –4C during the morning commute in the country's biggest city, due to a cold front coming in from southern Siberia. Meanwhile other parts of the nation remained affected by heavy rain, snow and ice that hit over the weekend as many people returned to their home towns and cities after visiting family and friends elsewhere over the holidays.

The country's transport agency, Trafikverket, warned people travelling by car to watch out for slippery ice as they returned to work.

“You can bet that it's slippery. Take it easy on the roads and above all keep a distance [between vehicles],” press spokesperson Lennart Hellsing told the TT news agency.

However by 10.30am a number of accidents had already been reported. Two people were taken to hospital after a truck and a car collided on the E18 at Lekhyttan near Örebro in central Sweden.

On the E4 motorway near Nyköping, south of Stockholm, two cars were involved in separate crashes but no one was thought to have been seriously injured. The road had been heavily gritted after 20 accidents took place in the region on Sunday, as a sudden drop in temperatures coated the busy highway in sheets of black ice.

Further south in Staffanstorp, near Malmö, several cars had to be rescued over the weekend after being stranded by floodwaters, while the E6 road near Helsingborg was blocked by the rising waters.

However, despite earlier reports of fatalities, Swedish broadcaster SVT reported on Monday morning that no one was understood to have died during the weather chaos on Saturday and Sunday.