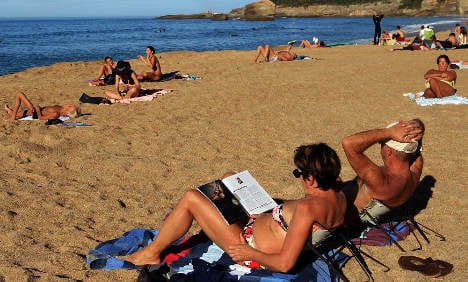 With their traditional festive julbords (Christmas buffets) still barely digested, thousands of Swedes logged on and booked a break in the sunshine while they were off work over the holidays, according to several major Swedish tour operators.

One company, Fritidsresor, reported a sales increase of 120 percent during the Christmas week, compared to the previous seven days.

As The Local reported on Sunday, it is common for Scandinavians to seek sunshine during the region's long, dark winters. However, it appears that many are choosing to book their breaks earlier than in previous seasons.

Magdalena Öhm, Communications Manager at Ving, told The Local that this was likely due to a wet and chilly summer in large parts of Sweden, leaving holidaymakers longing for sunshine even more than usual at this time of year.

“People did not get the sun they needed this summer,” she said.

A press spokesperson for Fritidsresor, Leyla Öfwerström, added that poor weather on home soil had also pushed up holiday costs in 2015, leading many to seek out bargain breaks in advance for 2016.

“Last summer was a pretty bad summer. For each drop of rain, the prices increased,” she said.

Both companies sought to put a positive spin on the fact that families were bringing out their tablets and laptops to book breaks instead of enjoying more traditional Christmas activities, explaining that it can be hard to find other time slots to plan vacations as our lives become increasingly busy.

“The Christmas holiday is a good opportunity when the family is gathered,” Öfwerström told The Local.

Spain remains the most popular destination for Swedes seeking sunshine, with Ving reporting that breaks in the resorts of Las Palmas in the Canary Islands and Palma in Majorca were “the most common reservations” in recent days.

News of the surge in holiday bookings came as southern and central Sweden experienced a drop in temperatures, with ice and snow covering the roads as many commuters returned to work on Monday morning.