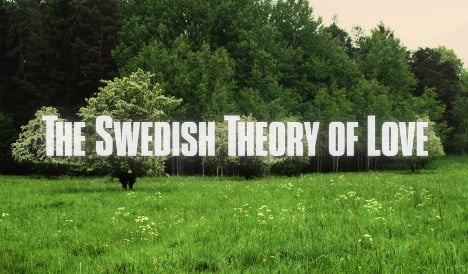 The film’s title comes from a term coined in the book Is the Swede a Human Being? by historians Lars Tragardh and Henrik Berggren. They said that only when two people were fundamentally autonomous, with no material or financial dependence on each other, could you have authentic love.

It’s a model on which the much-admired Swedish welfare state has been built, but Italian-Swedish filmmaker Erik Gandini looks at the modern epidemic of loneliness which has developed in what he calls “the most individualistic country in the world”. The Local spoke to Gandini to learn about the film.

What inspired you to make The Swedish Theory of Love?

I’m half-Swedish, half-Italian and have divided my life between two cultures since birth. I grew up in Italy but Sweden was always very present, it was a kind of fantasy. Even my Italian father talked about it as a promised land and going there in summer was like going to a paradise.


Gandini, who says he has “an outside perspective” but is “not an outsider” in Sweden. Photo: Johan Bergmark

I moved to Sweden aged 20 and have lived here ever since. At first, I found the way people socialized was mysterious for someone more Italian than Swedish – as I was when I first arrived. This is something I have always wanted to explore; that's why I made the film.

Sweden is totally different from Italy, which has a strong tradition of family dependence and of living together, and where you can’t just rely on the state. They are very different countries, both good at different things. I am always thinking about how we can bring the two countries together and combine their best sides.

Did you find out anything surprising about Sweden when researching for the film?

I was very disturbed during my research; loneliness is a real problem and it is something you can measure. Half of the population live alone, one of the highest rates in the world.

In surveys about happiness in different countries, Denmark and Sweden always do well, but this clashes with the fact that Scandinavian countries have the highest consumption per capita of anti-depressants. The Red Cross – who usually deal with wars and catastrophes! – did a survey which discovered 40 percent of the Swedish adult population feel lonely, and launched campaigns to try to combat this. Gandini spoke to sociologists including Zygmunt Brauman, above, who has written extensively about modernity. Photo: Fasad

Then I learned about the growing problem of people dying alone. One of the chapters of the film is about the team that look into these cases, who told me: “You only see people’s houses from the outside or their Facebook lives, but we see the truth behind the happy surface.”

It was eerie to follow their work; for example seeing an apartment where an old man lay dead for two years unnoticed – an unimaginably long time. It’s my ultimate nightmare to end life that way.

For people in Ethiopia, for example, it’s beyond their conception that someone can die alone. This is exactly what I reflect upon when I travel to countries considered to be less modern. We look at them with feelings of superiority as if we know better, but I have a strong feeling that in the ‘fast forward’ movement towards modernity, we’ve forgotten how to value very simple human qualities.

So is the aim of film to inspire change in Sweden and challenge the stereotype that it is a model society?

I loved Sweden from the moment I came here. At 20, I could support myself through the system and be independent. There are so many reasons I am happy living here – the strong gender equality, the policies towards the environment and refugees, all of which are very impressive, but at the same time, there are some very dysfunctional sides and that’s what the film is about.

Sweden is the future, it marks the direction the whole world is going in; the move away from survival values to values of self-realization. It’s great as a social system, but I wanted to give us a mirror and show us what we might be missing out on in the search for individual freedom. It raises the question of how this changes the way we relate to each other.

Right now there is lots of talk about refugees, and so much talk about the ‘cost’ of immigration. Too often, migrants end up in our suburbs, not integrated. Sweden is a very segregated country with too much distance between ‘us and them’.

Instead, we should see the values which come with them – their social skills and the human value of their lifestyles as something that could really help us from the tendency to detachment.

Do you think Scandinavia’s wintery climate and sparse population contributes to feelings of loneliness?

The odd thing is that when I spoke to social services about people dying alone, they said that in the countryside people are much more connected; it is the big cities where this type of loneliness is strongest. It’s more likely to be linked to the system of values, where independence is the most important thing, as if the worst nightmare is to be dependent on one another. There’s also the issue of gender equality – in the ‘70s, the idea of liberating women from men was very necessary and became a driving force. The film starts with a home-insemination; you can go to a sperm bank, browse for a donor, receive a box with a sperm sample and literally do it yourself. It’s a part of modern life and it’s great that you can determine your own life, but this idea has become dominant in a way which is extreme and creates distance between people.

There’s distance between Swedes themselves, but particularly between Swedes and people who move here. There’s a scene in the film with a teacher telling refugees to reply to questions the ‘Swedish way’ with short answers, and I wondered what would happen if Syrians and Eritreans could teach Swedes how to give longer answers, how to eat together and socialize more.

You’re being quite critical of some of the things Swedes are most proud of – what has the reaction been to the film?

The film has only been shown at international festivals and the Stockholm Film Festival, but so far I’ve seen people recognize themselves in the film and they laugh. I consider myself Swedish so I have an outsider perspective but don’t feel at all like an outsider. If we can laugh at ourselves it’s a very good start, it means you don’t take yourself seriously and are opening up, which is my hope.

The Swedish Theory of Love will be released in cinemas on January 8th.

LONELINESS
Why is Sweden so depressing? The Local answers Google’s questions

STOCKHOLM
Stockholm Pride is a little different this year: here’s what you need to know
Url copied to clipboard!