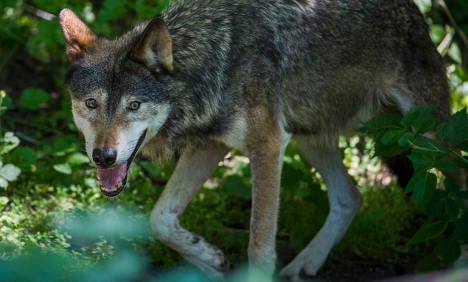 A wolf at a Swedish wildlife park. Photo: Jonas Ekströmer/TT

The administrative court decisions in the western city of Karlstad, and in Falun, in central Sweden, were a victory for environmental groups including the Swedish World Wildlife Federation, which has been fighting a decision to authorise the culling of 46 wolves.

Uncertainty remained on licenses to kill six more wolves, as a third decision was expected Tuesday by the administrative court in Uppsala.

The Karlstad and Falun courts ruled on Monday that the Supreme Administrative Court
must evaluate whether the hunting licences are in conformity with European directives.

As a result the next hunting season, which is set to begin on January 2nd and end on February 15th, is likely to be either shortened or cancelled.

Sweden's Environmental Protection Agency estimates that the wolf population stands at just over 400, and recommends that the population be kept at that level by regulating hunting.

The hunters also argue that many of the wolves they culled had been in good health, which shows that the species, considered extinct in the 1970s, has made a good recovery in Sweden.

“We have the decisions of parliament, the government, the regions and the Environmental Protection Agency to say that we must have a wolf hunt. I really do not know what more you can ask for,” Torbjorn Lovbom, president of the Federation of Hunters, told the Swedish news agency TT.

The back-and-forth battle has seen Sweden resume wolf hunting in 2010 and 2011, leading to a protest by the European Commission over the country's hunting quota policy. Hunting resumed again early this year.