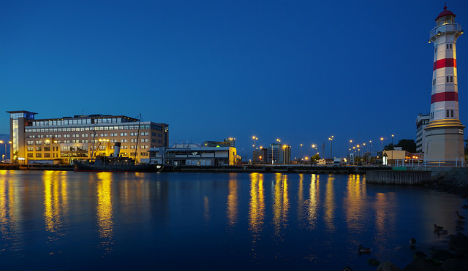 The skyline of Malmö with no sign whatsoever of the Northern Lights. Photo: barnyz/Flickr
The NOAA Space Weather Prediction Centre in America put out a statement earlier this week alerting stargazers to look out for an unusually powerful Aurora Borealis around New Year's Eve, after the eruption of a sunspot cluster earlier this week sent a huge burst of energy racing towards earth.
But according to the three enthusiasts at Norrsken, Sweden's leading Northern Lights site, the reaction in the media has been totally over-the-top.
“The year seems to have ended with some sort of record-hyped Northern Lights event,” they posted on the group's Facebook site. “We cannot remember a similarly over-exaggerated event.”
The group accused NOAA of “misleading half of Sweden's population”, spurring hopes of the lights being visible as far south as the city of Malmö in Skåne on Wednesday night or in the early hours of New Year's Eve.
The “explosion” of solar activity that did arrive at 1.20am on Thursday morning, was, the site noted, “not much to hang on your Christmas tree”.
According to Kristoffer Molarin at Swedish weather forecasters Foreca, the current heavy cloud cover over much of Sweden had also contributed to the poor showing.
“It's going to be covered with clouds here in the northern parts for most of the beginning of next year as well, so it's going to be pretty tricky to spot anything I'm afraid,” he told The Local.
In their post, the Norrsken trio said that they were hoping for some further activity on New Years Eve.
“But an enormous Aurora Borealis over the whole of Sweden we can perhaps forget for tonight,” they wrote.
However, strong Aurora Borealis are expected to light up the first week of 2016, due to a coronal hole, a region where the solar wind is allowed to leave the sun faster than normal and which sparks strong displays, according to the NorrskenSverige blog.
The Northern Lights are a famous feature of Scandinavian autumn and winter nights but they can prove difficult to spot unless you live in the far north of the country.
The phenomenon has been described as nature's own disco and tourism based around the natural light show is increasing in Sweden.
It is usually best seen before midnight with the most intense part typically lasting less than ten minutes.