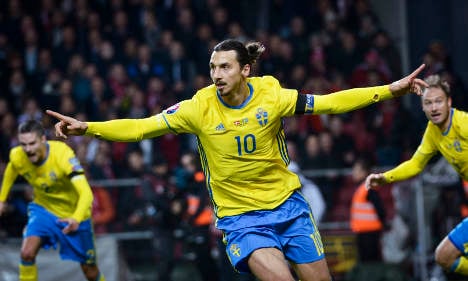 The Paris Saint-Germain player told reporters he did not intend to stop playing for the French champions despite his contract being due to run out at the end of the season.

The 34-year-old, who played in PSG's 1-0 friendly win over his former club Inter Milan in Doha on Wednesday, has been heavily linked with a move to US league MLS and clubs in England's Premier League.

But Ibrahimovic said that “nothing was on the table” regarding future offers and he was happy in the French capital with PSG riding high in their bid for a fourth straight Ligue 1 title.

“I have a beautiful relationship with PSG. I have no intention of leaving,” said the Swede when asked about his plans.

Ibrahimovic joined PSG from Inter in 2012 and was briefly banned from the pitch for calling France a “shit country” earlier this year.

Earlier this month he gave a slightly different message about his future, suggesting that he did not know who he would be playing for in 2016 and beyond.

“In my thoughts now I don't have any destination,” he said. “This is a new situation for me,” he told the AFP news agency.

“Normally, I have a contract for years and then change club but this is something different. My contract ends and then you are free to do whatever you want, so something totally new for me.”

Asked if he would extend his international career beyond next summer, Ibrahimovic said: “When it comes to the national team, I have the Europeans. I am happy we have reached the European Championships and I will be playing and I will enjoy it.”

Sweden has been drawn in a tough group for Euro 2016 in France in June next year, comprised of Italy, Belgium and the Republic of Ireland.