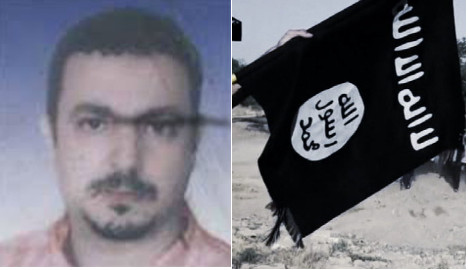 A photo of Mohamed Moumou, the father of arrested Abdullah Moumou and an ISIS flag unfurled in Syria Photo: US Army/TT
Abdullah Moumou was seized as he crossed into Turkey from Syria in August, and has been held by the Turkish authorities ever since.
He denies any involvement with terrorist groups, maintaining that he had been on his way back from Iraq, where he had travelled to collect his younger brother and bring him to Sweden.
“I am completely innocent,” he told Sweden’s DN newspaper. “I travelled through Syria to Iraq to pick up my little brother to take him to Sweden. As I entered Turkey, I surrendered myself to the border police. They suspected me of having fought with the IS, but not all Muslims are terrorists.”
The man said that he believed he had been targeted because of his father, Mohamed Moumou, who according to the US was al-Qaeda's second-in-command in northern Iraq, just under Abu Ayyub al-Masri.
Moumou, who was on EU and UN terror lists, died in a shoot-out with US troops in the city of Mosul in 2008.
“This is all connected me with my father. The Swedes have always wrongly been afraid that I will be like my father. But he is he and I am me,” the man told DN.
According to Magnus Ranstorp, the leading terrorism researcher at Sweden’s National Defence College, the man is well-known to Sweden's security services.
“He has been on the authorities’ radar for long. I have heard from my sources that he was on his way to Syria. We do not know what he was doing there and who he met there,” he said.  “But it does not surprise me that he is now under arrest. He is a person who shows up in extremist circles.”
In the summer of 2012, when the boy was just 16, the Administrative Court in Stockholm put him into care because of fears he was being recruited to fight in Syria or Iraq.
“Abdullah Moumou finds himself in a criminal environment and is at risk of being recruited as a fighter outside the country,” the court ruled. “At the exact time he was taken into custody there were indications that he was on his way out of the country to take part in armed conflict.”
Ranstorp said that the man’s father had been Sweden’s most notorious Islamic terrorist.
“He is the one who has the most blood on his hands of all the Swedish terrorists and is a well-known name in international security circles. There is no Swede to match him,” Ranstorp told Dagens Nyheter.
According to Swedish security service Säpo, more than 125 Swedes are currently fighting in Syria and Iraq, of whom 35 are women.
Url copied to clipboard!