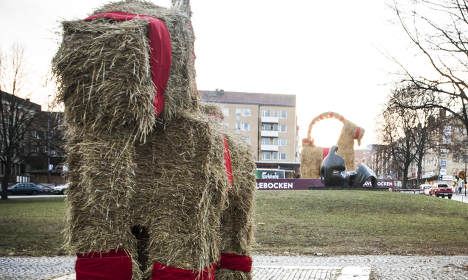 “In the early hours of Friday, someone drove up to the little goat, jumped out, lit it on fire, and then jumped back in the car and drove away,” Sven-Erik Hammar, duty officer at the police in Gavleborg, told the Gefle Dagblad newspaper.

“Now all that is left is the skeleton.”

There are no suspects for the crime.

Last Sunday police arrived at the scene of the burning big goat to find a heavily intoxicated man in his twenties who was arrested close to the flaming structure.

“The suspect was carrying newspapers and lighters and was wearing a balaclava,” Peter Hultqvist, an office with the local police, told Expressen. “He was drunk and smelled of petrol.”

Video shot on the site show that the man's clothes caught fire when the petrol with which he had doused the animal was ignited in a fireball.

It was just the latest in a series of attacks on the goat since it was first erected in the late 1960s.

Over the years, the goat has been run over by a souped-up Volvo, attacked by a team of Santas and Gingerbread men wielding bows and arrows, and burned down by a gullible American tourist who had been convinced by his Swedish hosts that doing so was perfectly legal. He served ten days in prison.