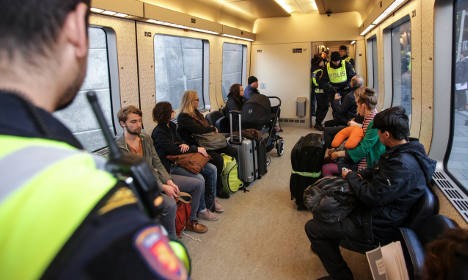 Police on the Öresund train from Denmark to Sweden. Photo: Stig-Åke Jönsson/TT

The UNHCR fears that asylum throughout Europe could be curbed if more countries follow Sweden’s lead and impose stricter entrance requirements.

“Unfortunately, it looks as though those wishing to gain asylum to Sweden will have to present valid identification,” Mattias Axelsson, spokesperson for UNHCR in northern Europe told the Swedish news agency, TT.

“There is a tremendous strain to be on the run and you can not expect that those who are entitled to asylum will also have the right documents with them from the beginning – it is quite impossible.“

“But that's where we find ourselves now, unfortunately. We look on this with growing concern, “Axelsson said.

The ID requirements follow Sweden's decision to reduce the number of asylum seekers coming into the country, due to an accommodation shortage.

They will apply to trains, buses and ferries from abroad, including Germany, but will have the biggest effect on passengers travelling from Denmark.

The plans have been criticized by various operators and unions warning of travel chaos in the busy commuter region.

More than 150,000 refugees have travelled to Sweden in the past year.

But the country has seen a nationwide dip in the number of people claiming asylum in recent weeks, following news of the tighter border checks and a government announcement that it would cut the number of residency permits made available.