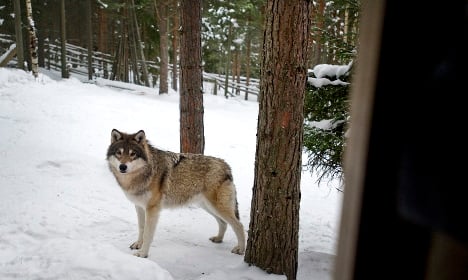 “Our staff will inspect it, weigh and take samples. The body will then be sent to the National Veterinary Institute,” Jonas Bergman, a conservationist at the county administrative board told the newspaper Sodre Dalarnes Tidning.

The animal was shot and killed near the town of Ludvika in Dalarna County.

Under a temporary ruling, 14 animals can be killed until the hunting season ends on February 15 unless the Supreme Administrative Court issues a final decision ahead of that date.

Sweden's Environmental Protection Agency estimates that the wolf population stands at just over 400 and recommends it be kept at that level through regulated hunting.

Hunters claim wolves have been decimating stocks of other game and threatening hunting dogs in rural areas.

They also say that many of the wolves they killed had been in good health, which shows that the species — considered extinct in the 1970s — has made a good recovery in Sweden.

A back-and-forth battle between hunters and conservationists saw Sweden resume the cull in 2010 and 2011, leading to a protest by the European Commission, which oversees European Union laws on protecting wolves and other endangered species.

A temporary ruling last week allows for the killing of 14 wolves in two regions, less than a third of the 46 animals in five regions that was originally planned.

EU members can carry out a cull of wolves provided the measure is justified on very specific grounds and meets conservation criteria.

But in its 2011 complaint, the EU executive said Sweden had failed to meet the conditions for an exemption.

Sweden was also faulted for failing to devise a habitat strategy to help a wolf population that the Commission said was “small, threatened by both geographic isolation and inbreeding.”

France, another country where wolves have returned, also sets a quota of animals that can be killed in order to protect alpine flocks.