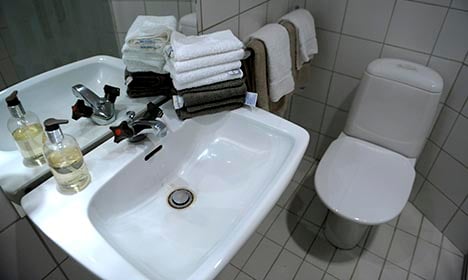 A stock picture of a bathroom. Photo: Janerik Henriksson/TT
Police in Östergötland in southern Sweden said in an online statement that the man's hands were badly damaged in the accident which happened in a residential area in the town of Vadstena on Monday morning.  Emergency services were called and he was taken to Linköping university hospital for treatment.
Local newspaper Corren – which first reported the explosion – said that the blast took place when the man poured a chemical down a basin. According to the paper, he had been asked to clean out and decontaminate the property by an aquaintance.
“An explosion, sure, but it wasn't some kind of bomb,” Fredrik Kliman, a spokesperson for the region's police force, told Swedish tabloid Expressen.
“He has managed the chemical substances in a way which has led to a severe chemical reaction,” he added.
Kliman said that police had spoken to the victim and planned to question him further to find out more about the substances he was using during the sanitation exercise.
Vadstena is a small town close to Vättern, Sweden's second largest lake.