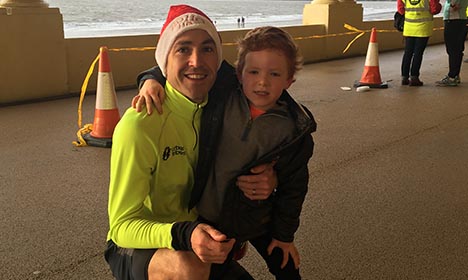 Deri Thomas moved to Sweden 10 years ago, when his Swedish girlfriend Anna finished her degree in the UK. But their love story started back in 2001, when the couple first met in England and made an unusual decision to try to share their lives between both countries.

“We actually tossed a coin back in 2002, to decide which country Anna would study in…She came and studied in the UK for three years and we moved to Sweden in 2005 when she finished her degree,” Thomas tells The Local.

A decade later they have a house, kids and jobs in Sweden, and have realized they are here to stay.

Thomas has forged his career in the running industry, drawing on one of his biggest passions.

Until recently he was the managing director of Urban Tribes, a company that mostly provides fitness training to around 40 businesses, largely in the Stockholm area and Gothenburg. It also organizes running courses, classes and races for the general public.

When it comes to advice on how build a career in Sweden, he says it depends on what skills you have when you arrive in the country and what area you want to work in, but he is convinced that one thing is vital whichever industry you're part of.

“Make contacts and get yourself a little bit into the local environment,” he says.

Thomas has spent much of his time in Sweden playing for the football team Långholmen, which mainly consisted of native English speakers. He says this helped him create a lot of contacts and friends, which made it easier to make other connections with the Swedish community.

“It is really hard when you first arrive and you have not mastered the language, and the Swedes can often be a little bit reserved as well,” Thomas explains.

Thomas has recently stepped down from his managerial position at Urban Tribes and is currently working in operations and sales for the company while he focuses on his goal of encouraging more Swedish residents to pick up their running shoes.

He hopes to use the connections he has forged to introduce more free running events to Sweden as part of a movement known as Parkrun.

“I’ve seen it grow enormously in the UK the last few years. I just think it is an fantastic concept,” Thomas explains.

Parkrun organizers put on five-kilometre runs that take place every week and are completely free. Those who sign up get a unique barcode, which they can use to track their time each time they participate as well as chart their improvement over time. The events are popular around the world with over 120,000 people participating every week in 13 countries, with Australia one of the biggest markets alongside the UK. All the runs are managed by volunteers with the backing of sponsors. A few minutes before a parkrun go off at Barry Island. Photo: Private

But while Swedes are famously sporty, Thomas argues that formally organized runs (rather than coaching events) are often expensive and irregular in the Scandinavian country.

“There is still a real running boom in Sweden, so it’s very much a good time for something like Parkrun to come along as well.”

He aims to organize the first Parkrun in Sweden in the summer of 2016 in Hagaparken, one of the largest green spaces in the Swedish capital.

The Briton hopes that runners will share the experiences he gets from pounding the parks and pavements of Stockholm, arguing that it is a fitness pursuit that allows people to push themselves physically, meet new people and clear their heads as well as being an easy way to train.

“It is such a simple and uncomplicated form of exercise. Put your shoes on and then you go. There is nothing more uncomplicated than that.”