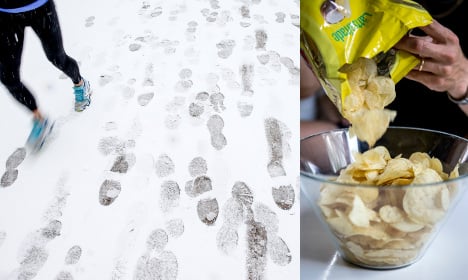 Police arrived at the scene at the Ica grocery store in the village of Edane near Arvika in central Sweden at 5.30am on Sunday, where they found burglars had broken a window and stolen bags of crunchy chips.

But they also discovered a trail of footprints in the snow, which led them straight to the alleged culprits' hideout – where they caught the trio with their hands in the snack bags.

“They had broken a window to the store and had taken a bag of chips each. It's small values, but they were held and have been arrested on suspicion of burglary,” police control room officer Stefan Sundberg told regional newspaper GT.

Earlier the same morning police in Karlstad – just some 40 kilometres away – seized an 18-year-old man suspected of stealing a television after a witness spotted his tracks in the snow.

Another suspect linked to the break-in was still being hunted on Monday morning.

“We don't always have tracks this good to follow,” said Sundberg about the officers' icy fortune.

The two incidents came as Sweden enjoyed its first real taste of winter in the new year following the record high temperatures of December.

Temperatures are predicted to stay freezing in the coming week, ranging from -25C in the north to -1 in southern Sweden. So thieves, if you're reading this, better wait until spring.